The Helicarrier is SHIELD’S most powerful and prized possession. Over the years, SHIELD has jumped ship from one Helicarrier to another with each successorship being more powerful than its predecessor. Some of them though have some truly legendary prowess that any army in this world would envy and have wet dreams of. 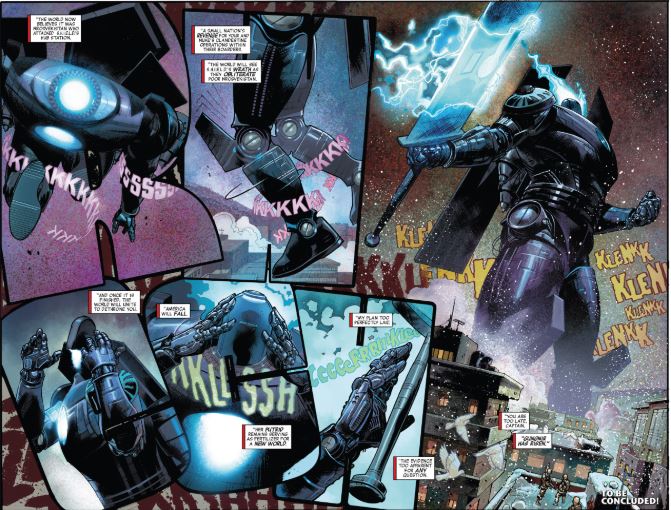 Nobody knew the existence of this Helicarrier in the Marvel Comic Book Universe until its existence was revealed in Captain America #9. It was considered so much of a threat that it was hijacked to ensure it did not turn the tide towards the enemies’ favors. We never knew why someone would spend so much time and resources to capture the Gungnir. And in Captain America #10, we finally discover why Gugnir was this special. Gungnir was not just a flying fortress. It had another unique built-in function. Gungnir could transform into a giant robot holding a massive energy weapon on command. Now, who can beat that!! 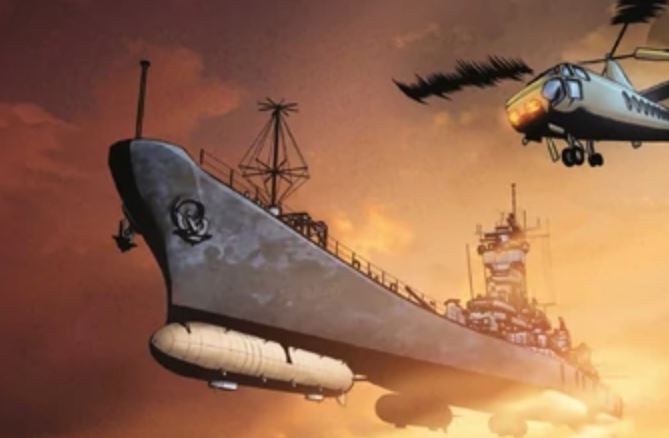 The Dirigi-Carrier does not look like an advanced unit from a distance. It belongs to Earth-90214 otherwise known as the Marvel Noir Universe. The Dirigi-Carrier is actually a heavily armed and armored battleship that is kept air-borne using hydrogen and helium dirigibles right underneath its hull and superstructure. The Dirigi-Carrier may not be as advanced but it is equipped with some serious firepower. Its cannons are the most powerful cannons to be ever placed within a battleship. It was so superior in technology at that time that the Office of National Emergency aka ONE used it as its base of operations.

Project Insight was Hydra’s secret plan to turn SHIELD’s Helicarrier technology into a weapon of mass destruction that works on the basis of a pre-emptive strike. Doctor Arnim Zola created an algorithm that could pinpoint and detect potential threats to Hydra and America. Once detected the Insight Helicarriers would be then used to immediately neutralize the threats via their superior firepower.

This operation will be carried out all over the world, 24/7. The Insight Carriers were automated and did not need human intervention, although a small group of people stayed on board for maintenance issues. The three Helicarriers under the Project would be linked to a satellite network that would help in potential threat detection.

Assault Carrier Samuel Sawyer was one of the most heavily armored Helicarriers to ever exist. It was a Super Class Helicarrier with not one but two massive runways. It housed more than 12 squadrons of the most advanced aircraft on its deck and hangars. It was named after Nick Fury’s Commanding Officer when he was posted as a soldier in World War Two. Samuel Sawyer looks like two Helicarriers rolled into one. It was used as a bastion for SHIELD’S armed and covert operations for a long time, having been duped the ‘Cape-Killer’ since its designers claimed it had enough firepower to take down beings like Thor and Sentry. 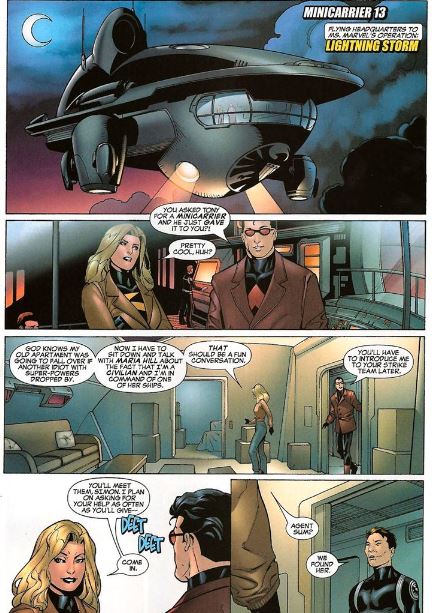 One of the greatest advantages of the Helicarrier is its massive size. It can house a lot of people and resources and can transport them across vast distances within a short span of time. But its size is also its greatest disadvantage. Minicarrier 13 solves that problem. The Mini carrier was designed to be small, sleek, sneaky, and stealthy. It was under the command of Carol Danvers aka Captain Marvel. It was a gift from Tony Stark, who helped design the Minicarrier 13 after Carol Danvers requested a separate unit and her own base of operations for To9ny Stark’s demand – fast-reaction covert special ops SHIEL Division. Captain Marvel used the Minicarrier 13 to travel the world and save thousands of innocent lives by working from the shadows. 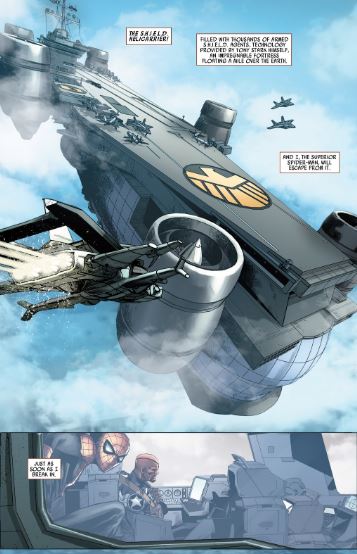 The Iliad is not your regular SHIELD Helicarrier. It was designed to take a hit. It had armor plating that even the Incredible Hulk would have a hard time ripping through. The Iliad was designed for siege operations. Predominantly used during the Avengers vs. X-Men storyline, the Iliad was shown to be one of the biggest and largest man-made structure in the comic books. It housed hundreds of superhumans and had enough space to house supplies for more than a year. It had electromagnetic pulse engines underneath that used the Earth’s gravitational field to stay afloat. So even if its engines were destroyed, the Iliad still would not go down. 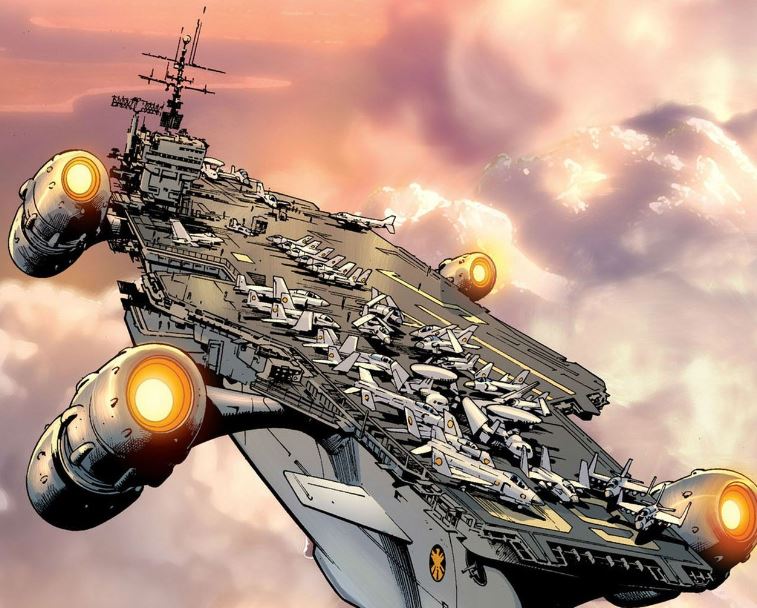 In the Ultimates Universe of Earth-1610, SHIELD does not have just one but multiple aircraft carriers that they operated all over the world at any given point of time. The headquarters of Shield was the Triskelion but they also had an air-borne battleship that acted as the command node to coordinate all these heavily armored flying behemoths that were scattered all over the globe. It was called the USS Jimmy Carter. The Helicarrier had some of the most advanced systems in the world in terms of offense and defense. In case of an attack on the Triskelion, the USS Jimmy Carter could be used a primary base of operations and could house all the leaders of SHIELD. It had to have some pretty neat design since it was designed to protect some of the most powerful people on Earth. 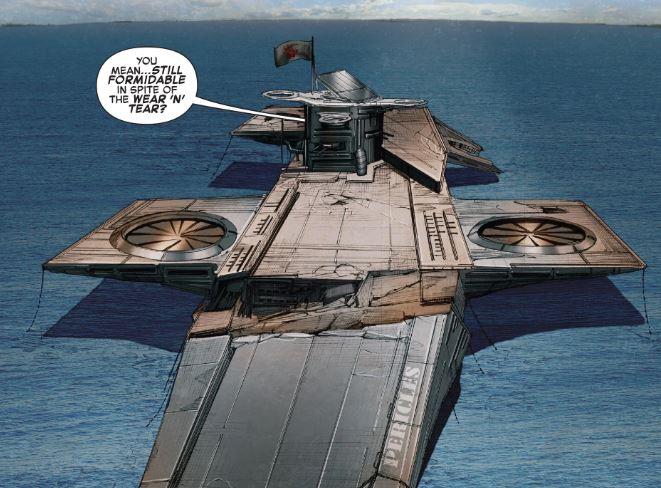 Helicarrier Pericles was one of the first airborne Helicarriers used by SHIELD. It had two powerful engines that helped it remain in the air. Pericles was damaged beyond repair after massive wear and tear and was decommissioned by SHIELD. The Helicarrier was then scuttled in the Pacific Ocean. The cable of the X-Force managed to salvage the wreck from deep underwater and then used it as the base of operations of the X-Force. 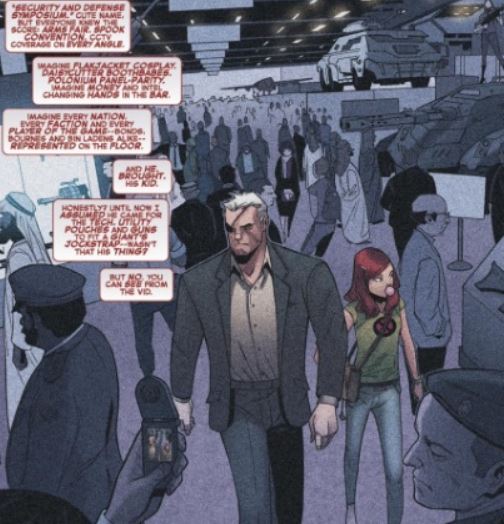 The Pericles houses an army of maintenance bots, the first of their kind to have been ever used in a SHIELD Helicarrier unit. They are completely automated and can repair the ship from any form or kind of damage provided they get enough time to do so.

This version of the SHIELD Helicarrier was seen in the Marvel Cinematic Universe movies. It is a Vertical Take-Off and Landing aircraft which is both seaworthy and airworthy. It is powered by four massive turbine engines that help it achieve a flight ceiling level that reaches up to the stratosphere. It also has reflective camouflage plating underneath the hull which hides it from being spotted from the ground by making the ship look like a patch of sky or cloud. The engines are also pretty silent, adding to its stealth. This Helicarrier is also more of an aircraft carrier. It has multiple hangars that can house a variety of aircraft like F-35s and Quin-Jets. A second generation of the same let go of the turbine engines for Repulsor engines based on the same technology like the Iron Man Suit. 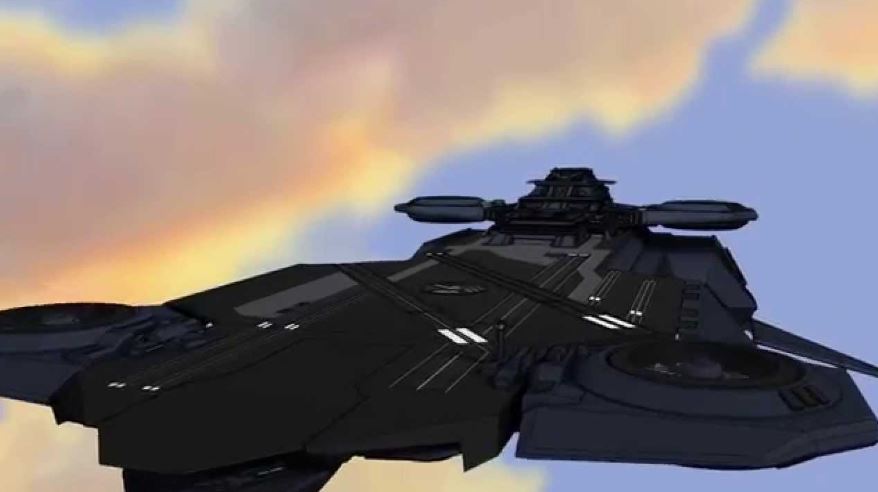 The Tri-Carrier made its first appearance in the Ultimate Spider-Man animated series. After the original Heli-carrier was destroyed, SHIELD needed a new Headquarters to operate out of. They decided to adopt the Tri-Carrier as their new base of operations. The Tri-Carrier, as the name suggests, is actually made up of three separate Heli-Carrier Units all rolled into one entity. The three components of the Tri-Carrier are – the Astro-Carrier, the Aqua Carrier, and the Strato-Carrier. 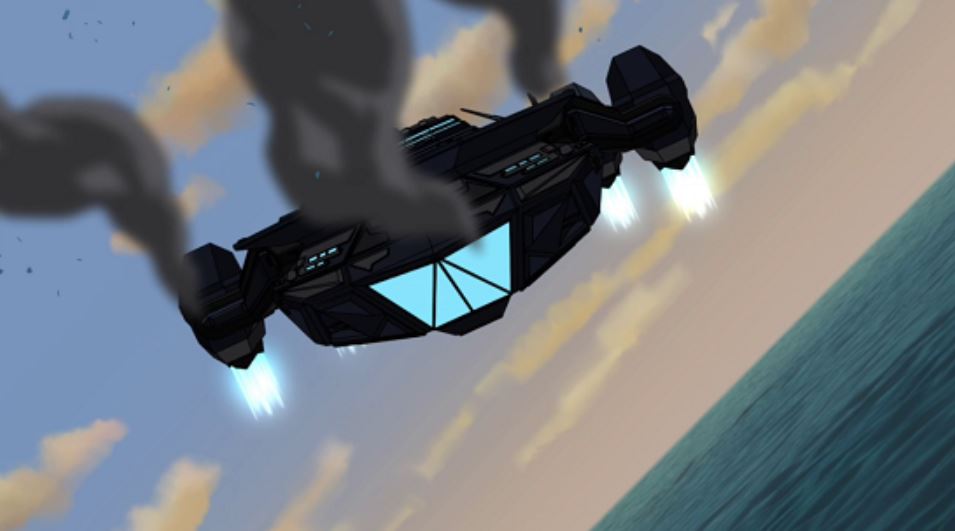 All three components can operate independently as well as in unison. The Tri-Carrier was helpful in stopping its predecessor, the original Heli-Carrier which had been taken over by the Green Goblin and made into the Hell-Carrier, from being detonated over New York City after Electro managed to hack into its framework.