Batman is known to be the only God amongst the Justice League who is there through sheer skill and training. He is a regular human with extraordinary human skills. But sometimes skill is not enough. DC Comics has given the Dark Knight an easy way out so many times in the comic books. Presenting – 10 Times Batman gained incredible Super Powers!! 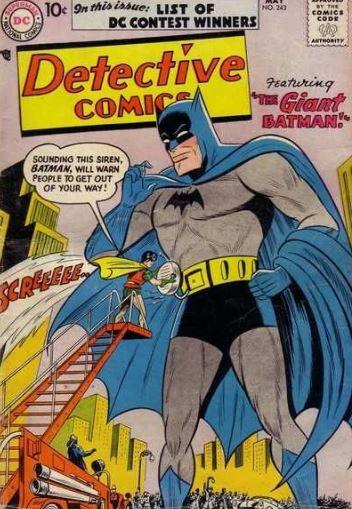 A scientist in Gotham City develops the Maximiser Ray Gun. The gun targets an object’s molecular spaces and enlarges them, effectively making stuff huge. Batman is hit by the rays from the gun by a thief he steals the technology to get back at Batman. Bruce Wayne is forced to stay out of the city because he has become a human Godzilla. 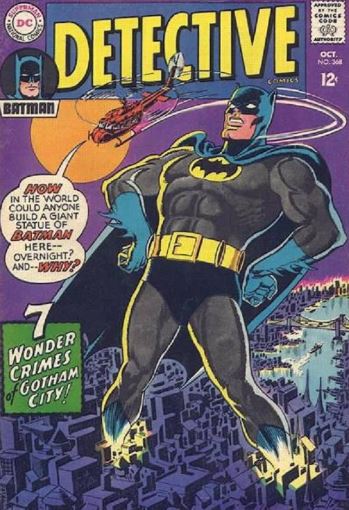 Since Batman is out of the city, the thief is now free to rob the city the way he wishes. But Batman uses Robin’s help to trick the bad guy into coming out of the city and there using the Maximiser Gun, Batman also turns the guy into a Titan and a fight ensues. The Minimizer Gun is used to bring them back to normal size after which Batman knocks the thief cold. 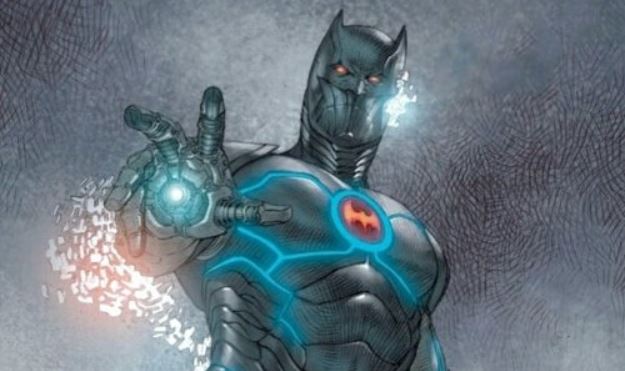 Batman loves Alfred. After the death of his parents, Alfred is the one that helped him survive through the grief and was a helping hand who guided him through his toughest of years. He is also the only one Batman trusted with his secret identity at first. Alfred dies in an alternate universe at the hand of a prominent super villain and Batman completely loses it. Trying to bring back Alfred, Batman takes the help of technology. 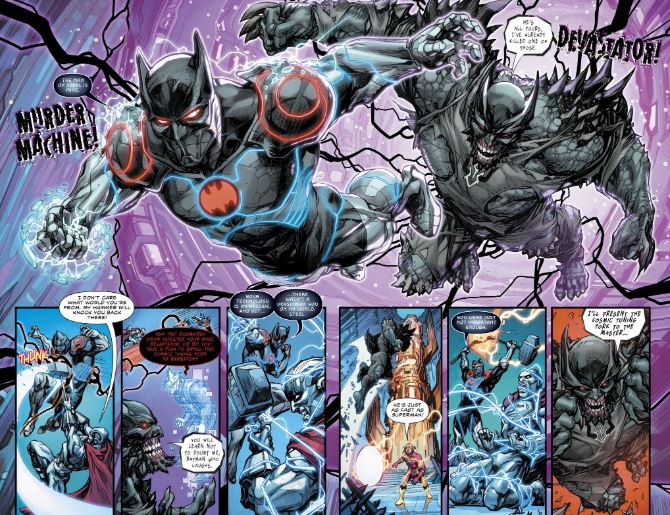 An Artificial Intelligence called Alfred is created and Batman him-self turns into a cyborg. The A.I soon corrupts Batman’s mind and he goes down the evil route. The Alfred Protocol turned Batman into a proper mechanical warrior with several enhanced cybernetic attributes.

Becomes the God of Knowledge 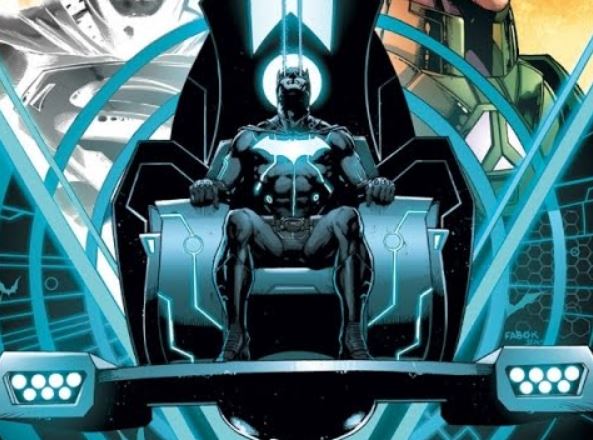 During the Darkseid War, the New God known as Metron is revealed to have some critical information in his grasp the Justice league could use to end the battle. Metron refuses to give it up and the league manages to trick him into leaving his throne, which is the source of all his abilities. 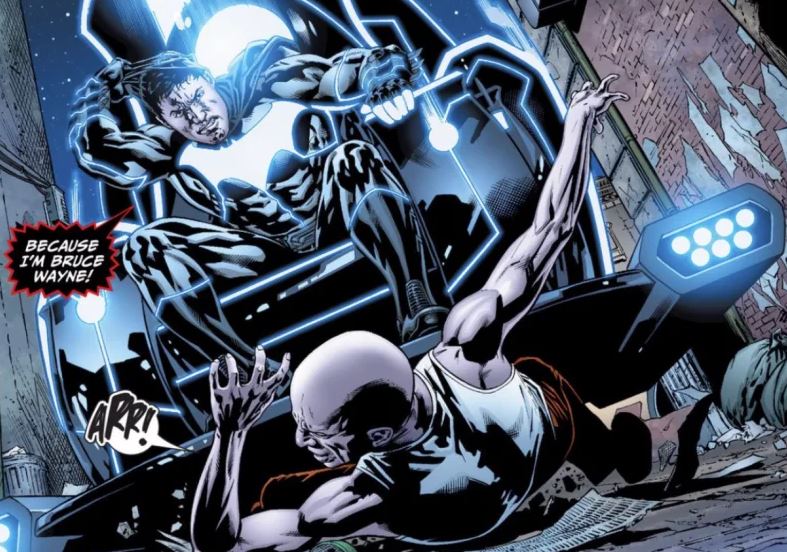 Batman is the one who sits on the chair next and becomes the new God of Knowledge, holding all the data and information in his mind thanks to the Metron Chair that Metron has collected and stored in his teleporting chair over millennia. The Chair gives Batman revelations that he would have never been able to guess like who is the actual killer of his family and the fact that there are more than one Joker in the DC Universe. 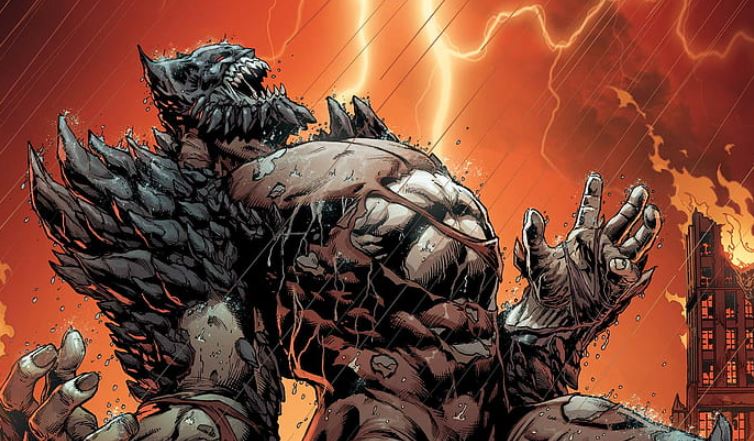 If Superman goes Rogue, the entire world is in peril. He has the power to do that and the world has no contingency to stop him. Batman trusts no one except him-self. So he has a fail-safe at all times with him if Superman decides to take a stroll into the road not taken. When Superman kills the entire Justice League in an alternate universe, Batman is left the last superhero standing. 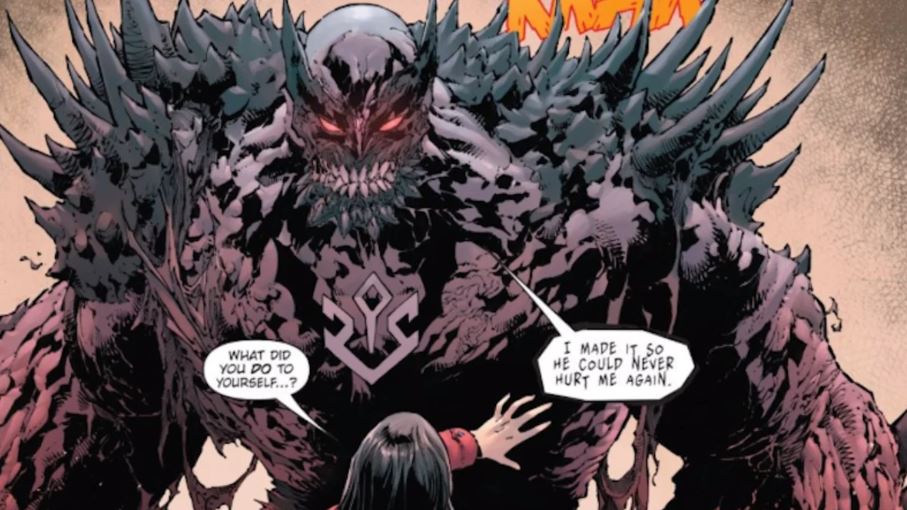 He loves Clark Kent and respects him as a friend but even Batman believes that he has gone too far. So he uses the Doomsday Virus to turn him into the Devastator. He has developed a mutagenic virus that can turn any living being into a being similar to Doomsday via touch.

Batman is a force to be reckoned with because of his tremendous will to exact revenge on the criminal world as part of his one man war on evil. The dedication and will-power required to carry on such a crusade day in and day out is enormous. The Green Lantern Power Ring looks for candidates with this kind of will power. Batman qualifies and is turned into a Green Lantern. 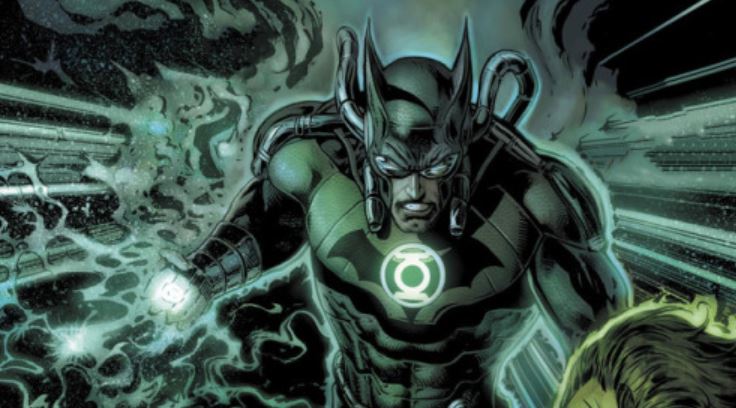 But the Ring comes with certain limitations. Green Lanterns cannot kill because the Ring will not allow it. Batman of this alternate universe is a cold blooded killer. His will is so strong that he bypasses the limitations on the Power Rings set by the Guardians. Even the entire Green Lantern Corps do not stand a chance against him.

Becomes the Avatar of the Speed Force 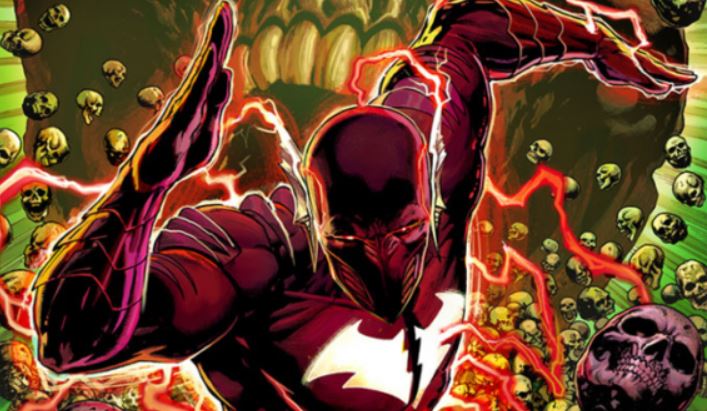 In Earth -52, Batman has lost all his allies and sidekicks to crime and evil. He has finally decided to go on a war path. He believes if only he was fast enough, things would have turned out very differently. The Flash of that Universe is then targeted by Batman. 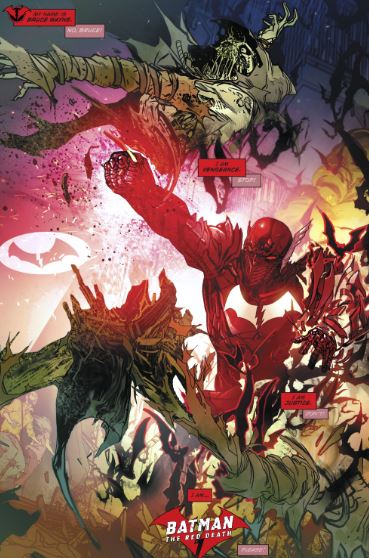 Using the weapons that Batman gets after killing Flash’s entire Rogues’ Gallery, he traps the Flash and uses a combination of the Cosmic Treadmill and the Bat-Mobile, opens a portal to the Speed Force. Batman emerges out as a speedster who can access the abilities granted by the Speed Force. He has actually absorbed Barry Allen into his body and is now the Red Death. 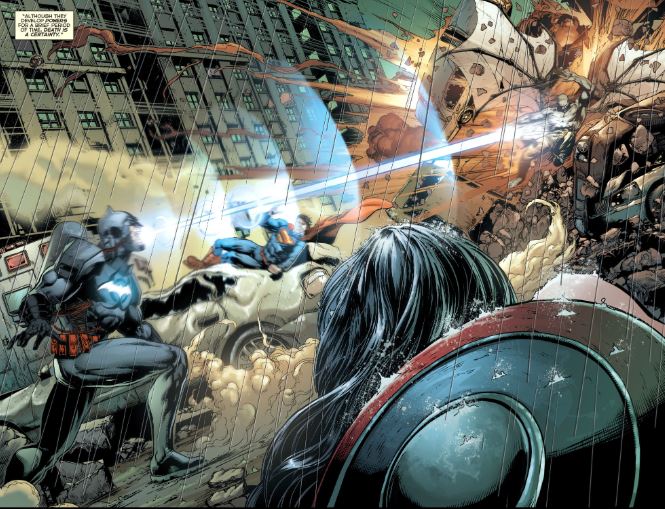 Lex Luthor hates super humans. He thinks that they are the greatest bane of humanity, stopping them from solving their own problems. Unfortunately, the rest of the world does not share his views. So he creates the Amazo Virus. This Virus attacks Super Humans and makes them extremely aggressive, giving them a huge superiority complex and thus turning them against mankind. 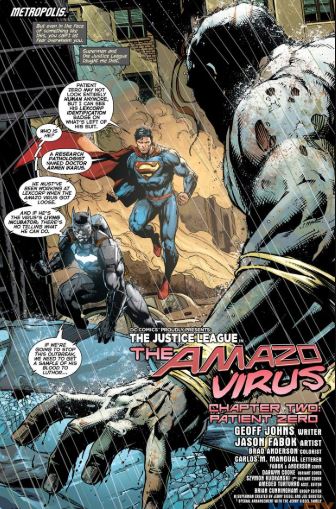 To the non-super humans, it gives them powerful abilities for a span of 24 hours post which they will die a quick death. Batman loses his sight after coming into contact with the Amazo Virus but gains the power of echo-location and the ability to project ultrasonic beams from his mouth which he uses against a Rogue Justice League.

Becomes a force of nature

A powerful ancient Indian artefact comes into the hands of Pete Dale. The artefact grants the ability to control the elements. Dale transforms into a literal force of nature. He can control fire, earth, wind, and water. Batman also uses the same relic to give him-self similar powers to fight Dale. First they turn into Earth and start trading in rock sized fists. Then they take the fight to the heavens after tapping into the power of the wind. They turn into water next and have a gruelling wet wrestling match. And then they become forces of fire. Robin uses this moment to trap both Dale and Batman is sand. The heat transforms the sand into glass and both are encased in hard silica. Dale loses his powers after coming out of his glass prison. 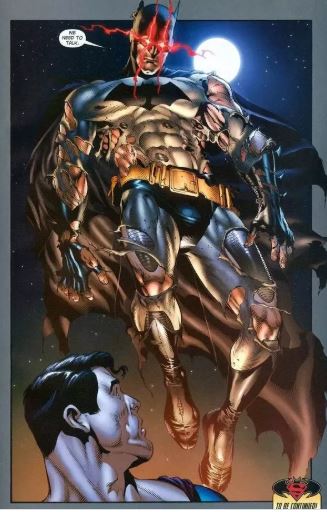 Superman and Batman are in hot pursuit of the Silver Banshee. A mystical ornament gives out a strange energy signature that affects both Superman and Batman but both do not realize what is happening. Silver Banshee is captured but Superman discovers that he is losing his powers. Batman comes to the bat cave to find out that all his wounds have healed. He soon gains super strength and the ability to fly. Batman with Superman’s abilities decides to become an Anti-hero and use his abilities for a new form of extreme justice. The Justice League managed to trick Batman into getting into contact with the ornament again and Batman loses his abilities while Superman’s powers are restored.

Becomes the Ruler of Atlantis

Bryce Wayne of Earth -11 is the female version of Bruce Wayne of an alternate timeline. Bryce’s lover Sylvester Kyle was killed by a band of evil meta-humans. She developed a deep feeling of hatred for all super humans and went on to kill each and every one of them. After the war between Atlantis and the Surface World broke out, Bryce used her wits to make Aqua Woman and her Atlanteans bite the dust. 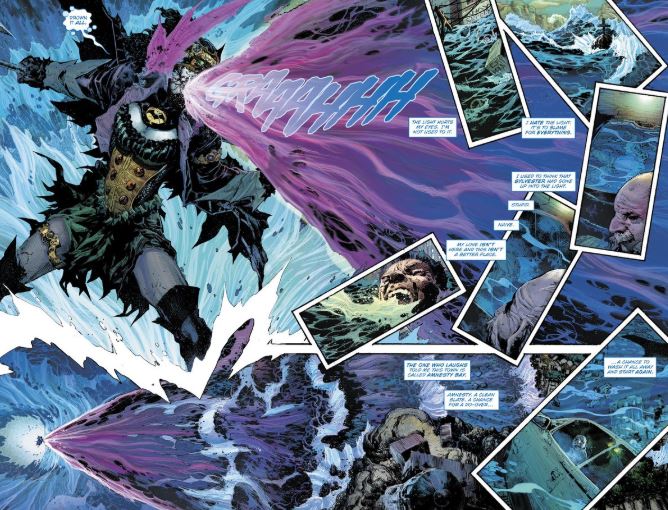 Atlantis’ ruler was killed and in retaliation, the Underwater Kingdom drowned the whole world in a huge tsunami wave. But Bryce did genetic surgery on her-self to keep her ahead of the curve. She could breathe under-water, had greater muscle and bone strength, the ability to control water, and the power to manipulate sea beasts of her own design called Dead Water. 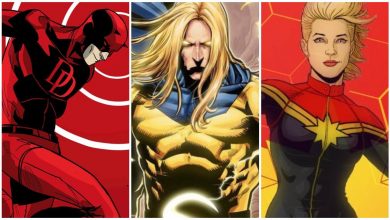