It seems like all those predictions about Marvel’s Black Panther is going to be true as the movie has won three big awards to its name at the Critics’ Choice Awards and now all the eyes are on the Academy Awards as hopes are getting strong after winning these three awards. In the 24th Annual Critics’ Choice Awards, Black Panther has brought three big awards to Marvel Studios and it’s great to see a superhero movie getting all these sorts of big awards which hints towards the domination superhero movies are going to have in recent future because nowadays the superhero movies are filled with pretty good storylines, costume, and visual effects. 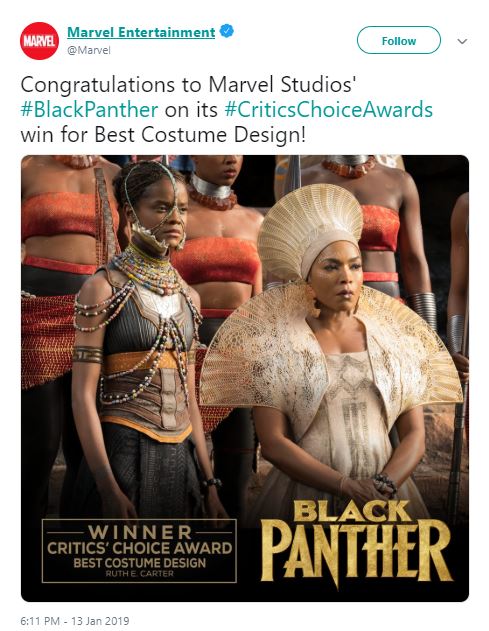 Now, we are going to talk about the awards which Black Panther has won and the first award is ‘Best Costume Design’. This didn’t come as a surprise as costumes of the movie were one of the most appreciated things of the movie and also there were a lot of critics and people who predicted that Black Panther is going to the best costume award and now winning here at Critics’ Choice, there are chances that the movie is going to win the same at Oscars. 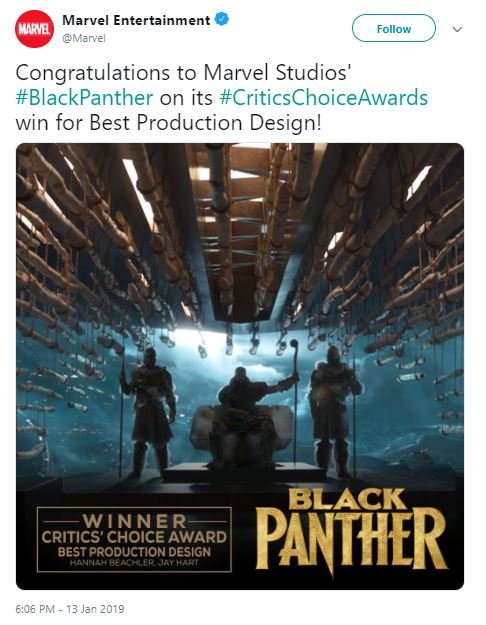 The second award they got their hands on is of ‘Brest Production Design’ and we have to say that it is the kind of award we expected from this movie because of the magnitude of this movie’s production as it’s visible that this movie needed a lot of hard work in the production department. No wonder the movie won this award despite having a sort of big competition from other great movies of the year. 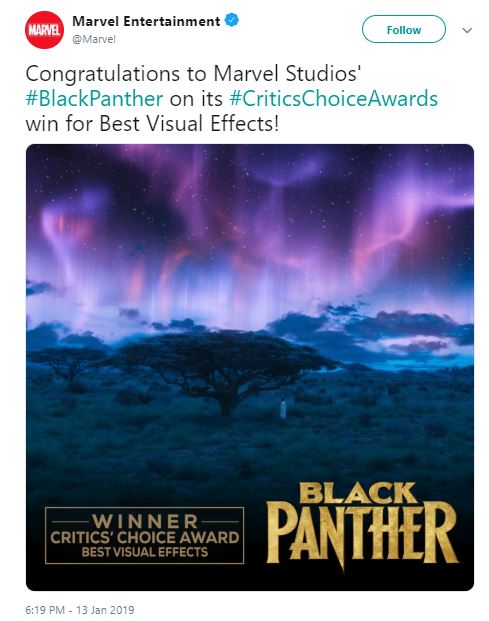 Last but not least, the ‘Best Visual Effects’ award. This category had a lot of big names but the biggest shock was that the movie Black Panther went on to beat Avengers: Infinity War in Visual effects and is the thing about which everyone is talking but we have to say that the visual effects of the movie Black Panther were in some places better than even the effects of Infinity War.

Also, we all know that the names who win something here are the ones who have strong chances of winning the same at the Academy Awards as we have seen it time and time again every year. Also, some people call it the predictor of Academy Awards’ results and chances are high for Black Panther to at least get one out of three even if things don’t go their way.

The movie Black Panther was a tremendous success at the box-office as the movie went on to cross the sum of $700 million at the domestic market, becoming the third movie to be able to get this feat under its name. Also, the movie is the third highest earning movie at the United States behind Star Wars: The Force Awakens ($936 million) and Avatar ($760 million). Last time around the Best Visual Effects Award was won by War of the Planet of the Apes.

Also, there are talks that the sequel of the movie is going to come in recent years and also there are claims that we could see Killmonger back. Speculations are rife that there may be some kind of resurrection and time travel in the movie Avengers: Endgame, because of which we all may see many villains of the MCU coming back in Phase 4. But in the end, a big congratulations to the team of Black Panther movie who gave a lot for the success of the movie.

According to you, will Black Panther win the Academy Awards in the same categories? Do tell us in the comments section down below.