Comics are an art form. A media that is used by writers and artists alike to tell stories that they deem worthy enough to be presented in front of fans. And just like any other media, the comic also suffer heavily from fanservice. Be it in the form of Batman triumphing over Superman or extra large assets of particular comic characters. There are numerous moments when the writers choose to represent the characters in sleazy and/or dramatic ways to encourage fans to buy the particular issues. Sometimes, however, the comics use sex and gore to make a point. The point can simply be the love and affection between two characters or rather a representation of such life, if not that the point can be as some as the insanity of the protagonist. This list will cover 10 instances from both Marvel and DC comics when the panels got a little too erotic border lining on smut. 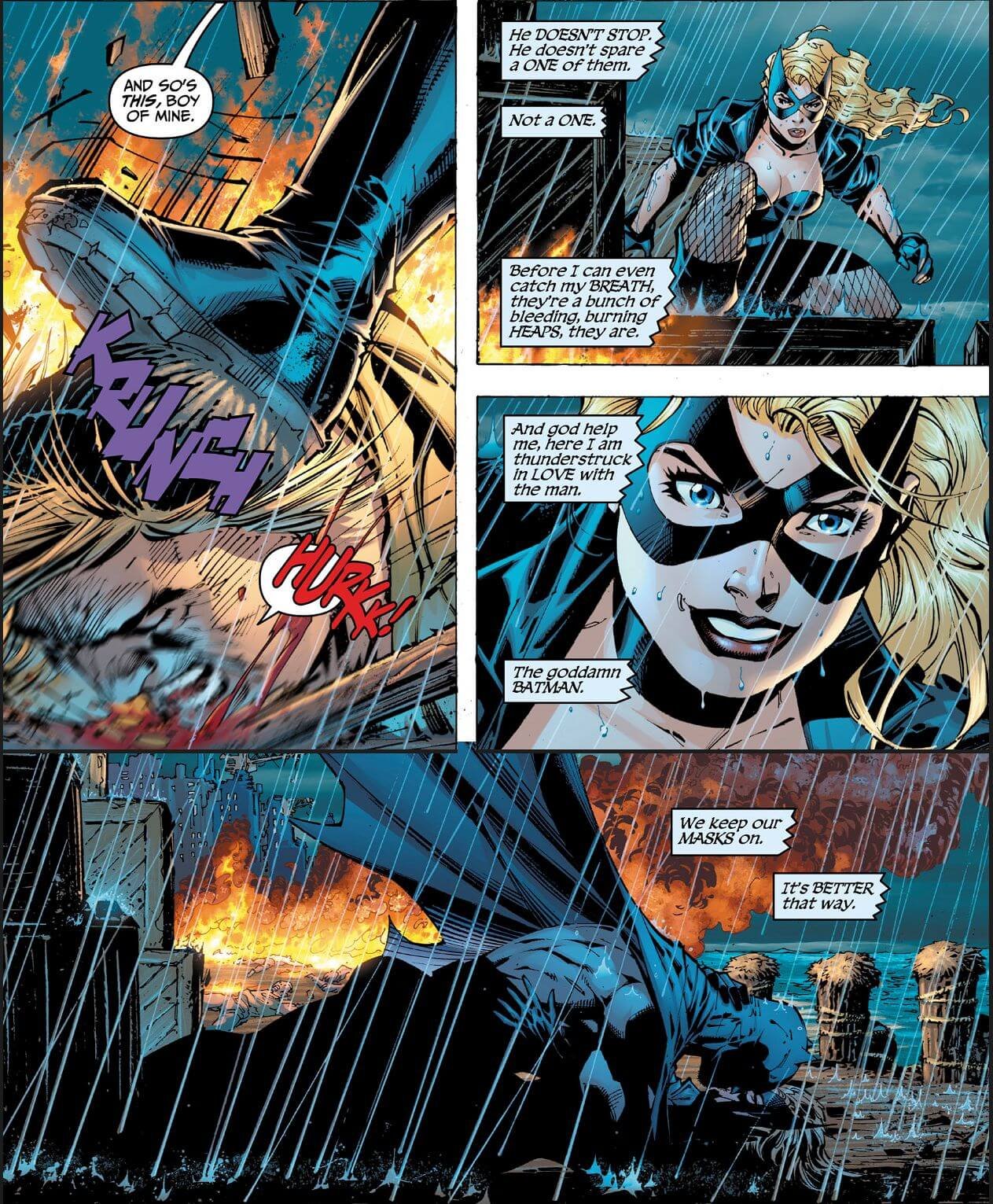 Arguably one of the more goriest of the sex scenes on the list. The God damn Batman series by Frank Miller was a rather dark take on the character. Not that Batman hasn’t been dark before. But this story arc took the self-righteous attitude of the Batman to its logical extreme. We are presented with a Batman who’s hungry for power and is blood lusted. But blood is not the only thing that Batman lusts for in these comics. There is this famous series of panels in All-Star Batman and Robin, boy wonder where the dark knight, as written by Frank Miller and penciled in by Jim Lee, first kills and cripples a bunch of thugs, then proceeds to shower them with gasoline and light them on fire. But that is not where the party stops folks because the Batman then proceeds to have sex with black canary who witnessed all this carnage and suddenly felt aroused because of Batman’s actions. Now, I’m all for blood sex and gore but these panels are a little too much, even for the likes of Frank Miller and Batman.

Antman and the wasp

Any Marvel fan worth their mettle will tell you that Hank Pam is arguably the most intelligent man in the Marvel comicverse. Second, only to the likes of Dr. Doom or Reed Richards aka Mr. Fantastic himself, the man is a prodigy and a level 11 intellect. He created the pun particles which gave him the power to manipulate the size of matter as he deems necessary. Dr. Pym has even scoured through the depths of the quantum realm. However, I have no idea what this man was thinking the time he shrank himself so that he could be “small enough” to satisfy his wife. I don’t know what these panels imply and frankly, I never wish to find out.

Batman and Catwoman in raunchy rooftop 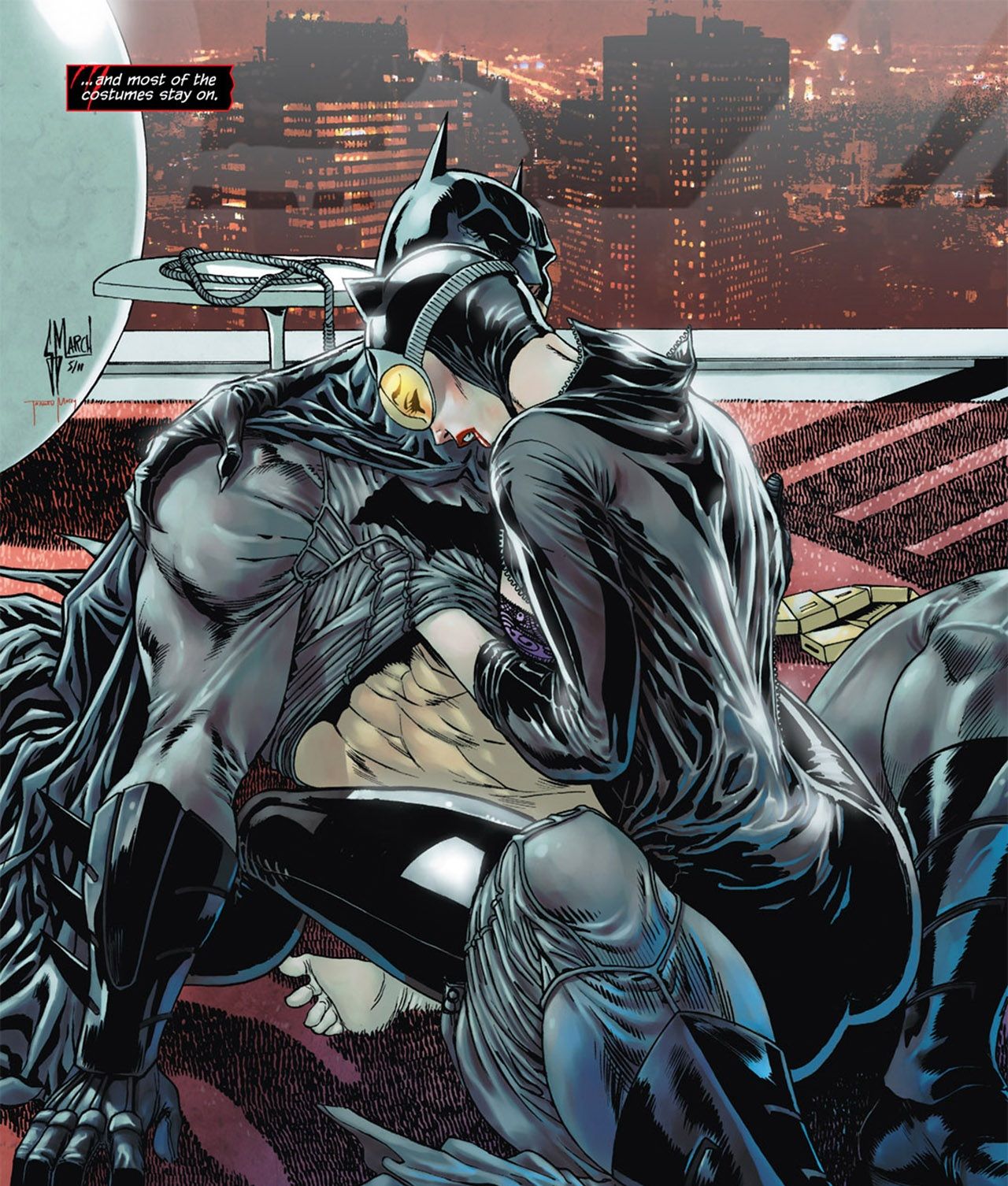 Longtime batman readers know the steep climb that is Batman and Catwoman’s relationship. These two have had more ups and downs in their romance than a series finale of Grey’s Anatomy , and I don’t even like Shonda Rhimes. Regardless this scene from a particular high in their relationship does take the cake as we see Batman and Selena Kyle get down and dirty on a rooftop right in the middle of a dark Gotham night. Any onlookers must’ve turned away with embarrassment or perhaps done something to embarrass themselves. It seems rather apparent that neither Bruce Wayne and nor Selena Kyle could keep their hands off off each other in this particular instance.

Oliver and Black Canary are trying

Arguably one of the more graphic sex scenes on this list. This couple is also one that both the comic readers and television watchers are rather familiar with, anyone who’s into the arrow lore knows that “Pretty bird” black canary is ollie’s longtime lover and soul mate. It is her whom Ollie was paired up with during the yesteryear of comics and the two have developed a rather uncanny chemistry on the panels of these publications. The love Ollie has for canary is only matched by his chemistry with green lantern. The three have emerged as a rather peculiar trio in comics. But here we see Ollie and laurel’s love unscathed by other mortals. The panels are rather illustrative and quite extensive , the pages were definitely a departure from the traditional sex scenes of the 90s. If you wish to read this comic it is Green Arrow vol. 2 #34 where canary and green arrow try to conceive a child.

Watchmen is set in an alternate timeline to the DC universe where superheroes had a very different origin. It is a dark and grim world where America’s dominance as a world power is essentially sustained by the existence of Dr. Manhattan. This superbeing dwells and controls the quantum realm and almost the entirety of time and space. He witnesses events that can hardly have said to have occurred. For every moment we live he goes through unlimited lifetimes. However, this creature is bound by the shackles of matrimony like all of us mere humans. He does have a certain advantage when indulging his wife in the pleasures of the flesh. In this particular instance, Dr. Manhattan clones himself (or arguably uses time remnants of himself) to engage silk specter II in a sultry threesome. This scene is also brought to life on screen with the live action Watchmen movie. 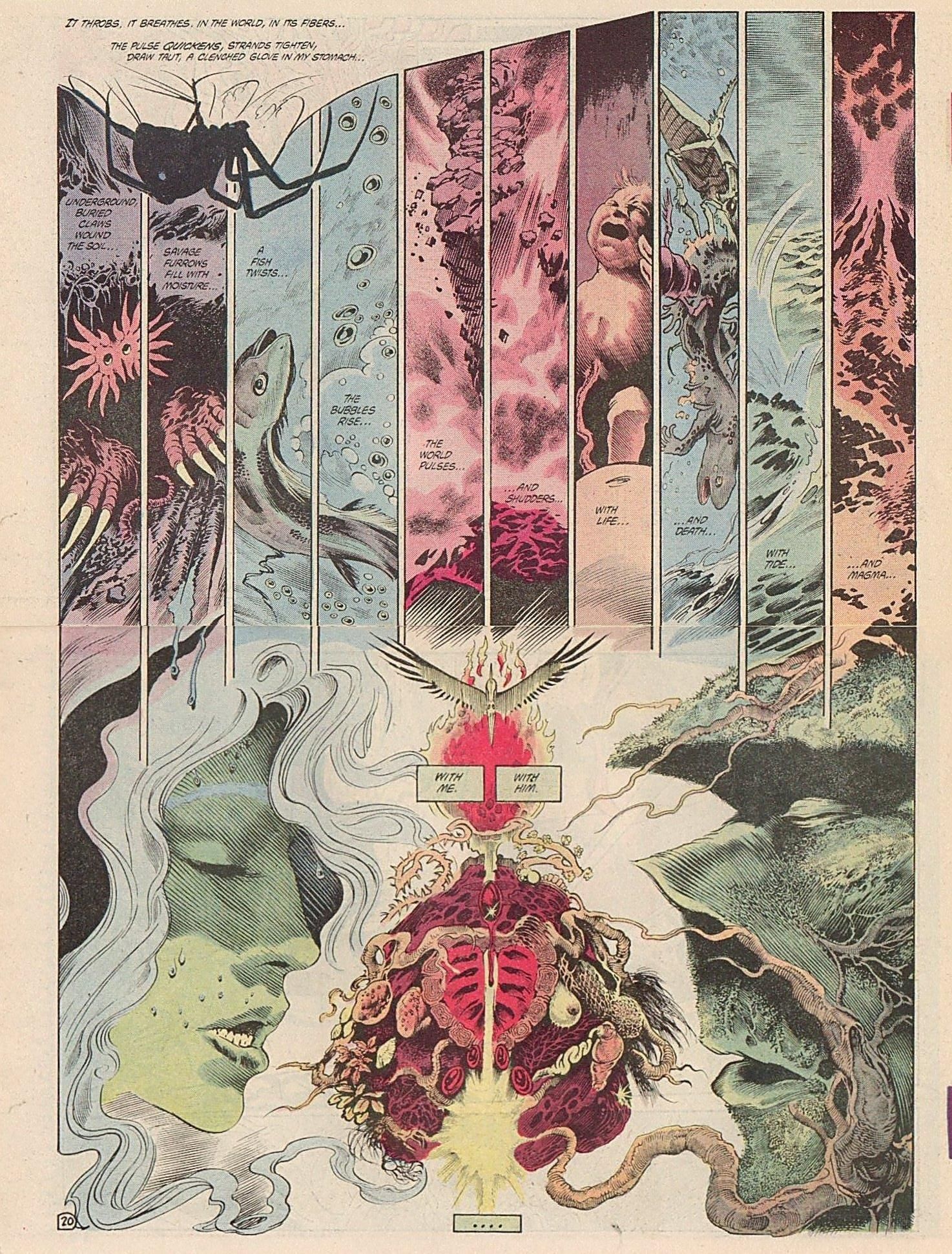 “I WILL NOT LET YOU HARM THE GREEN”

“But if you wish to pleasure the green that’s completely your prerogative >:- )”

Juggernaut and she hulk

She-Hulk vs The Juggernaut

What happens when an Unstoppable Force meets an immovable object?

Well apparently they wreck the room and from the looks of the picture the entire neighborhood. Never mind the property damage, consider the noise pollution as She Hulk’s screams reach high octane levels as she crumbles under the Brute Force of the juggernaut. Ahemm…

As fun as that sounds, the relationship never really existed in the canon universe, it’s just a joke the writers left us. But the illustration is definitely awe inspiring. The bed doesn’t seem to be the only thing broken… 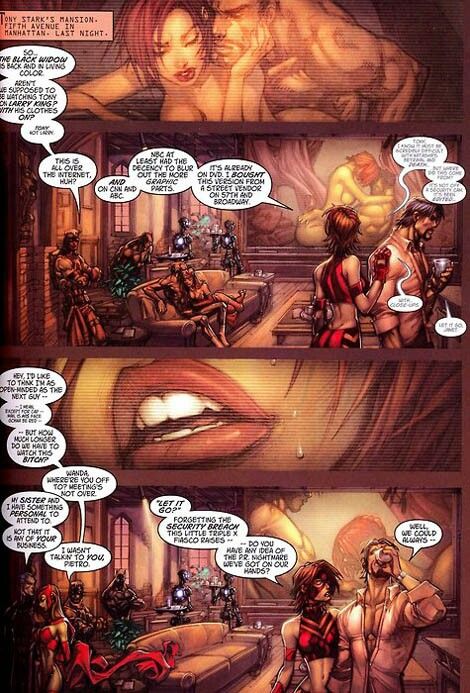 If Robert Downey Jr. and Scarlett Johansson ever ended up in a sex tape the entire MCU fandom will have an autonomous meltdown, considering the majority of it is made up of teenagers. Here , however the screen counterparts of the actors namely Black Widow aka Natasha Romanoff and Iron Man aka Tony Stark get down and dirty in these panels. The ‘couple’ did not intend to make a sex tape, rather the footage is pulled from a hacked security camera. Nonetheless, it is a scandal of alarming proportions. Both the participants of this scandal are not only known superheroes they’re rather respected in the superheroes community. The storyline that follows this panel is rather weak but when have we ever known marvel to pull off a good story.

Alright, I will admit it. The title of the post is a little suggestive but read through the following paragraph and tell me whether you agree or not in the comments

There is this issue known as The Incredible Hulk # 7.1, in this issue Bruce Banner and The Hulk are separated and we see a rather carefree Hulk roaming the expanse of the earth. So what does a Hulk do when he’s not angry?

He’s to have sex, said the writers at Marvel comics.

Yes, yes, yes, he must have sex. SPLENDID! screamed the printers.

*Facepalm* the readers wept and died. 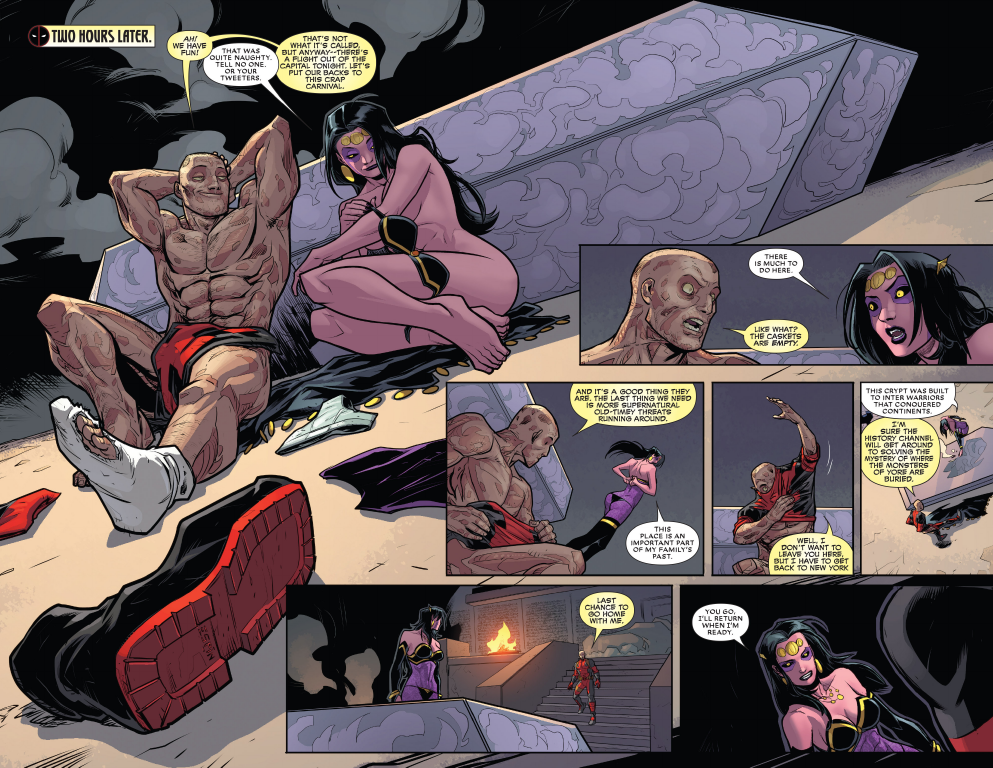 What is so scandalous about a man making love to his wife?

Perhaps the fact that the man is an immortal mutant whose mutation has bound itself to cancer in its body that makes the man ergo Deadpool nothing more than a mass of cancerous cells who have taken over their host’s memories.

Or the fact that the wife is a shapeshifting demon who has just punched a hole through a man’s chest which her husband not only encouraged but applauded.

Or maybe the fact that the couple has chosen a coffin to be their steed for sex and glory. I’m conflicted, see if you can figure it out.