The one thing we would’ve loved to see is Star-Lord & Captain America team up during the battle. Star-Lord met with Thor. He met with Iron Man. But he didn’t meet the boss, Captain America, not on screen at least. An interaction between them would’ve been nice. And apparently, there were plans for it as well. Sadly, it didn’t happen. And, there’s no room left for it to even happen in the future. The only guardians Cap has met are Nebula, Rocket & Groot.

What’s sad is that there were supposed to be other alien team-ups as well. Spider-Man was supposed to team up with Rocket, Groot, Korg & Miek. Right above is the deleted shot of Peter & Groot, two teens making a slingshot to shoot Rocket, who in turn would be able to shoot others. And beneath this paragraph, you’d find concept arts for Spider-Man, Korg and Miek fighting together. 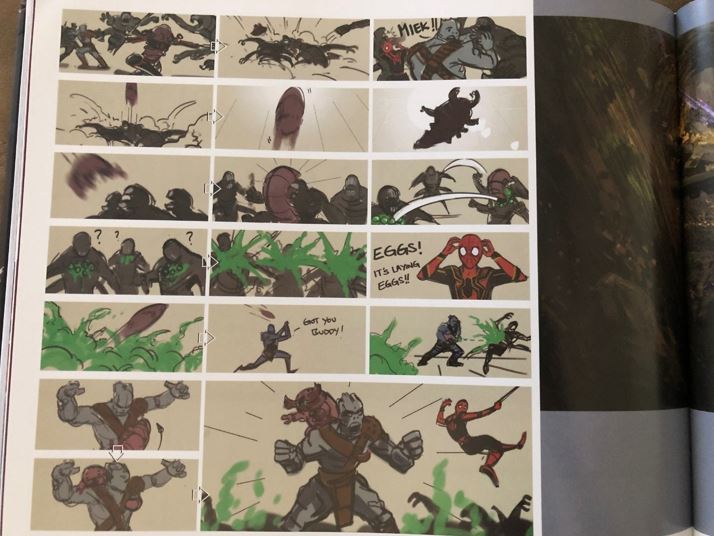 Miek really hides a lot of surprises as he would’ve laid eggs on the soldiers in Thanos’ army. That would’ve really scared the crap out of Peter. Here’s the description of this fight:

“So Miek gets surrounded by Outriders, and you think he’s down, but he pops out of the crowd and does a flourish and splays out right in front of the sun—so you get his cool silhouette. And he lands on each Outrider, jumping from one to the other—super agile without all his armor, because it’s been broken — and he’s actually laying eggs. And of course, Spidey sees it and is like, ‘Oh my God, it’s actually laying eggs.’ The last few frames are just Korg catching Miek like a football, and then they strike a hero pose — really weird, but hopefully funny.”

There’s some really great stuff in the art book that actually makes us feel greedy. Marvel could have done so much more if they would’ve used even half of the concept arts in the book. But it’s okay. The future of Marvel is still big. We could still see Star-Lord have some great team-ups. Imagine if he and the Hulk were to team up in a fight. Imagine if a full-sized Groot fought alongside Hulk. Spider-Man could still fight alongside aliens like Korg & Miek. He is the only hero that we’d love to see team up with every other MCU hero.

After Spider-Man 3, we’d totally love it if Spider-Man got along with the Guardians for a space mission. Or if he got along mutants like Deadpool & Wolverine. And it’d even be cool if we saw him alongside Vampires like Blade or Morbius. We’ll have to wait and see how Marvel & Sony will use him.