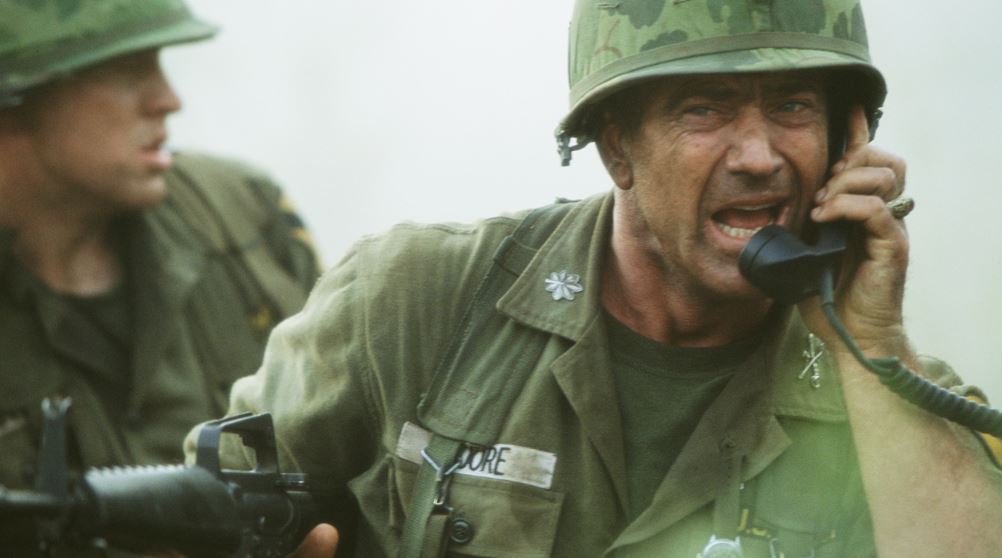 Although many do not like Mel Gibson, the guy has had some really amazing contributions to the movie-making industry. Take for example Brave Heart or Lethal Weapon – both are critically acclaimed and Box Office Block Busters. We Were Soldiers is one of his most underrated works. Set during the early months of the Vietnam War, Mel Gibson’s character Lieutenant Hal Moore leads his platoon to flush out Viet Cong forces in the dreaded Drang Valley in 1965. We Were Soldiers is one of the first movies to show actual footage from the Vietnam War as part of its script. It does not disappoint at all when it comes to action or thrill.

After the Allied soldiers tasted utter defeat in France, they were stranded on the beaches of Dunkirk. Most of Britain’s armed forces and infantry were trapped between a rock and a hard place. Dunkirk tells that tale of the British Effort to bring back their soldiers from the clutches of death. Christopher Nolan does not leave any stone unturned to make sure he shows the Dunkirk evacuation as realistically as possible. Dunkirk was the point where the tides of battle changed and the Germans started to be on the receiving end. Christopher Nolan uses his cinematographic skills to portray the move in three, differently paced tones. The amalgamation of the evacuation in three layers is what helps make the culmination and climax of the movie all the more graceful and enjoyable.

8. Master and Commander: The Far Side of the World 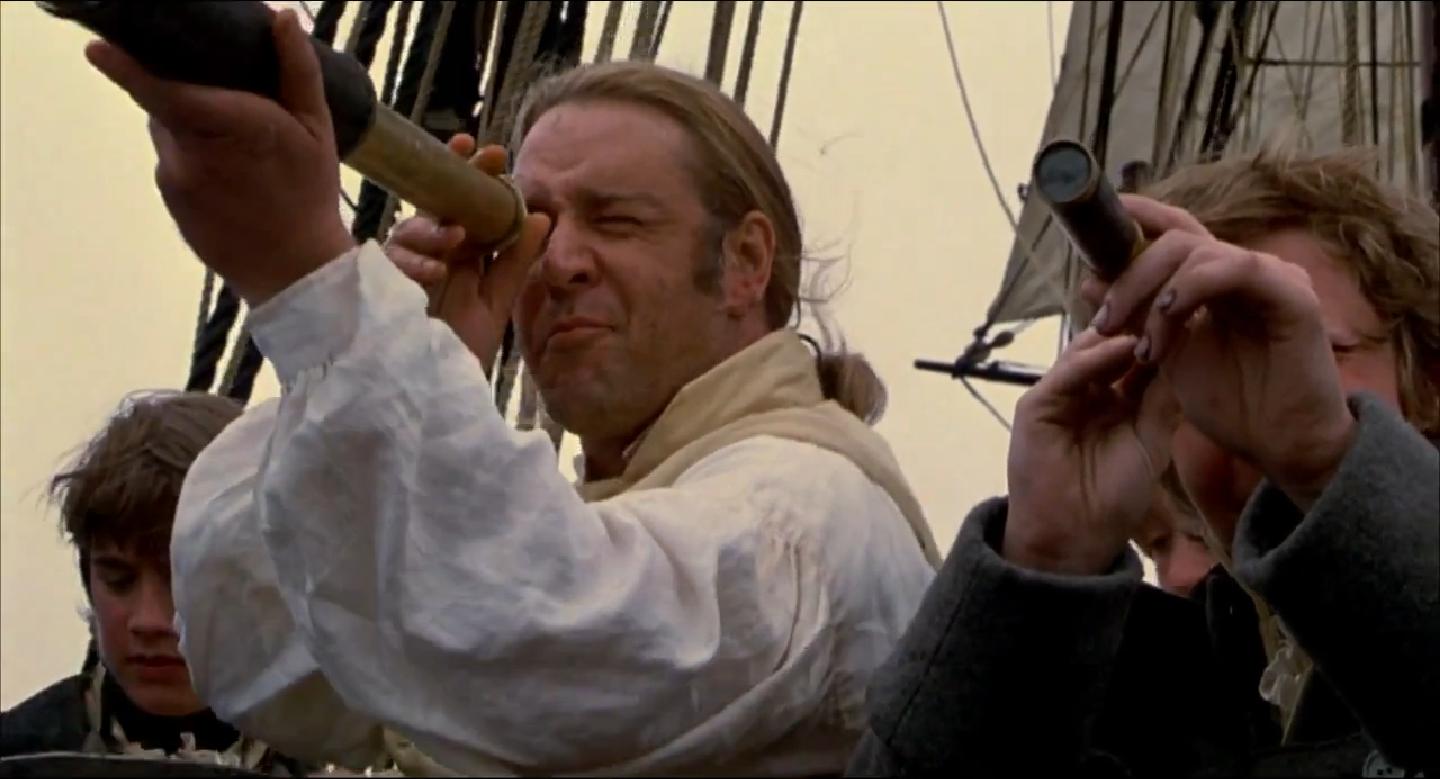 Master and Commander: The Far Side of the World is set during the Napoleonic Wars. The film stars the legendary Russell Crowe as Captain Jack Aubrey, a character that was burrowed from the Aubrey-Maturin series of books written by Patrick O’Brian. Captain Jack Aubrey is a veteran sailor serving Great Britain and the English Crown. He is the captain of the infamous HMS Surprise. During the war, Aubrey commands his men to search and destroy an enemy French War Vessel. But when his own ship comes under the line of fire and is critically damaged, Aubrey has to use his wits to sort things out. 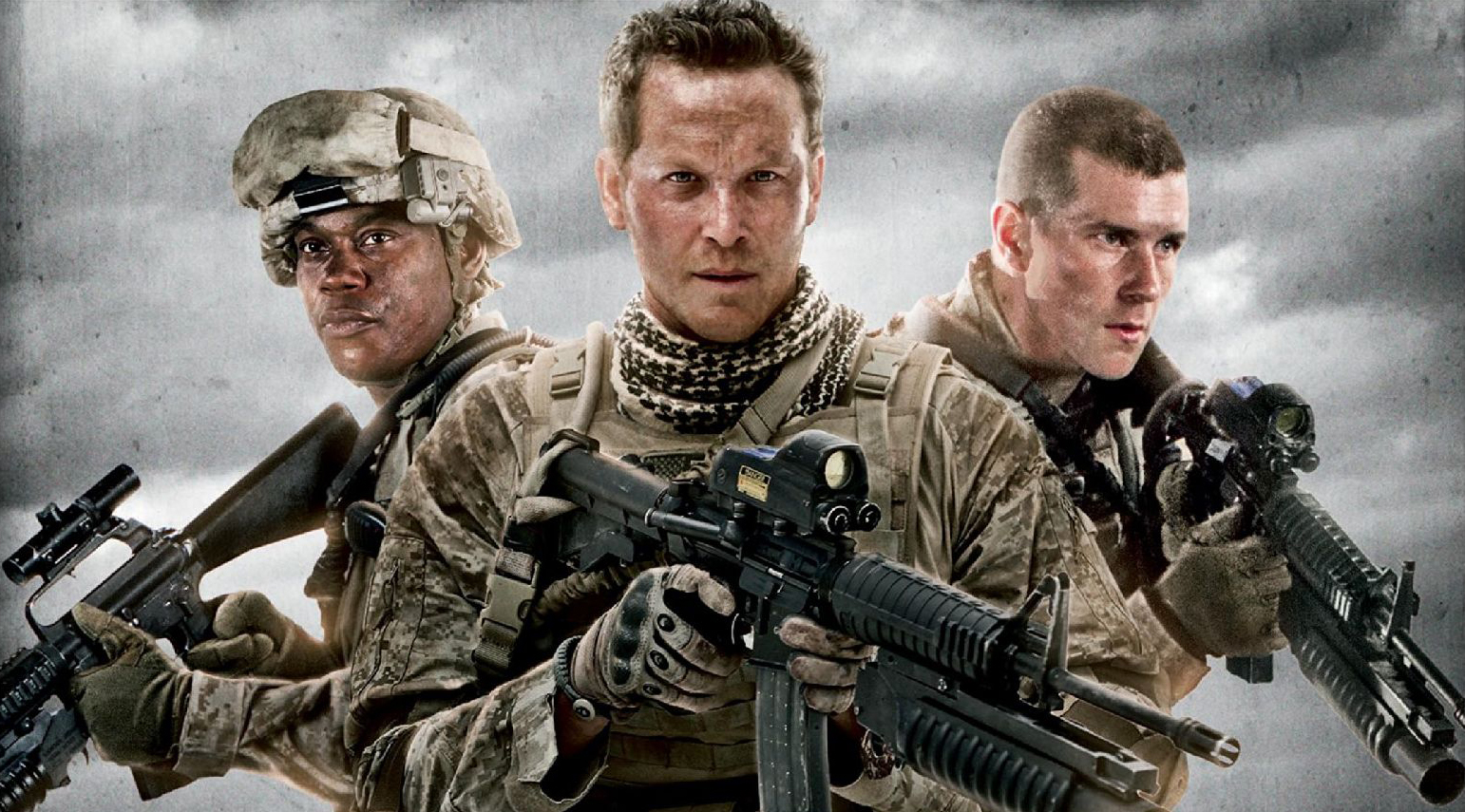 Jarhead plays out more like a documentary than an actual movie. Maybe the fact that it is based on the actual memoirs of US Marine Anthony Swofford published in 2003 has something to do with it. Jarhead is an entire film series with multiple movies set during the collective Gulf War era. It tells how Swofford suffered through loss, grief, regret, and depression, along with gaining comrades, making friends, and earning his brotherhood amongst the esteemed US Marine Corps. Watch it if you like war movies that are well-balanced in all aspects. 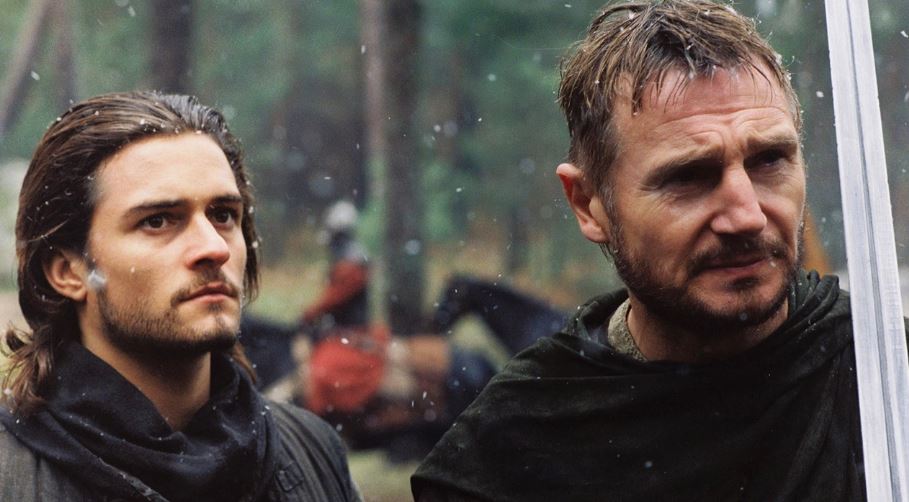 The only war movie on this list that does not feature gunpowder or even guns for the matter, Kingdom of Heaven is about Balian, a blacksmith who travels to Jerusalem and becomes a Knight. There he is thrust into the heart of the crusades. The Islamic and Christian forces fight over the rights to the Holy City. Balian does his best to stay out of it all but as fate would have it Balian turns out to be the only competent leader within the city. He then singlehandedly leads a motley group of citizens to safety as the entire City gets surrounded by enemy scimitars.

The Mountain II is a Turkish War Drama and action movie. It is also the only non-English entry on our list. The movie tells the story of two friends who are enrolled in the prestigious and grueling Turkish Special Forces Program. The movie is set during the times when the Islamic State was at its peak level of power and was grabbing land and resources within the Middle East. Turkey, one of the strongest opposition to ISIS’ hegemony, sends these two friends along with a larger contingent of special-force soldiers behind enemy lines. Their target is a journalist of Turkish descent who has been captured by terrorists. The Journalist holds some critical information that the Turkish authorities need for a larger offensive they are planning. The movie also shows us how soldiers at the front line of battle deal with violent and debilitating scenarios that turn them into bitter human beings once they are discharged into normal civilian life. 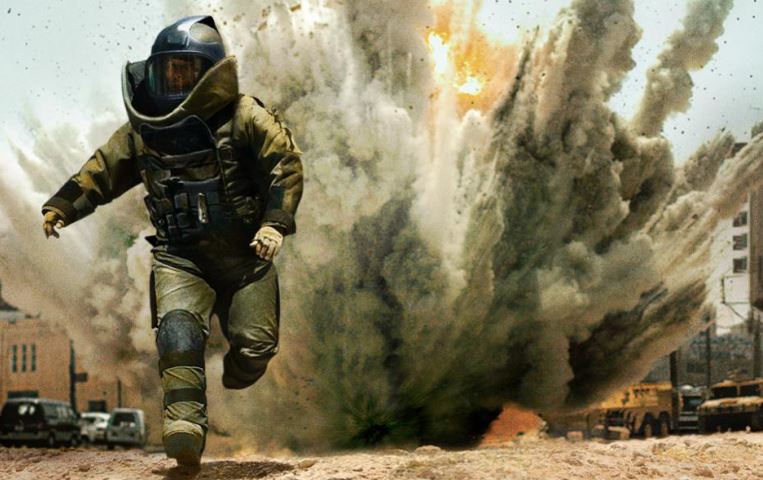 The Hurt Locker is a movie that won an Oscar. One of the first movies that depicted Veteran Soldiers’ Mental Disorders and their difficulty to adjust to a normal life after holding and shooting a gun at the enemy for so long, in all its glory. The Hurt Locker also takes us to the epicenter of the controversial Iraq War. Jeremy Renner plays William James, a renowned bomb disposal expert working for the United States Military posted in the heart of the battle. He is part of the larger Explosive Ordinance Disposal Team, a task force specifically made to neutralize the threats of IED units used by Iraqi Guerrilla Fighters. The movie focuses on how a soldier’s life in the middle of battle can stop him from having a normal life elsewhere. The heat and action of the Iraq War is felt throughout the course of the movie.

3. Beasts of No Nation 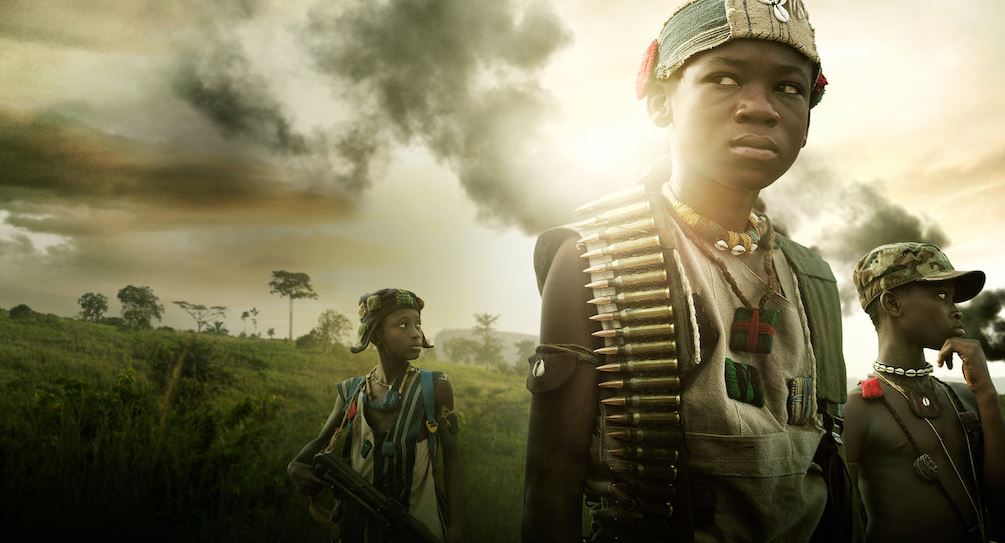 “Beasts of No Nation” is an award-winning movie that was a joint venture between America and Ghana. The movie states the story of a young boy Agu who is drafted into the Ghanian Military Rebels as a Child Soldier. As Ghana undergoes a forced change, Agu is left to fend for himself as Government forces and the Rebels fight for control of the Throne. As the Civil War engulfs the African Nation, hundreds of thousands of innocents die. Agu loses touch with his family who is then presumed to be dead. But luckily, Agu finds solace under the mentorship of the Commandant of a Native Rebel Alliance Faction. Played by Idris Elba, the Commandant helps Agu become a better soldier. But as fate would have it, everyone has a morally flawed compass. Even Agu suffers. The relationship between Agu and the Commandant also goes through several ups and downs. 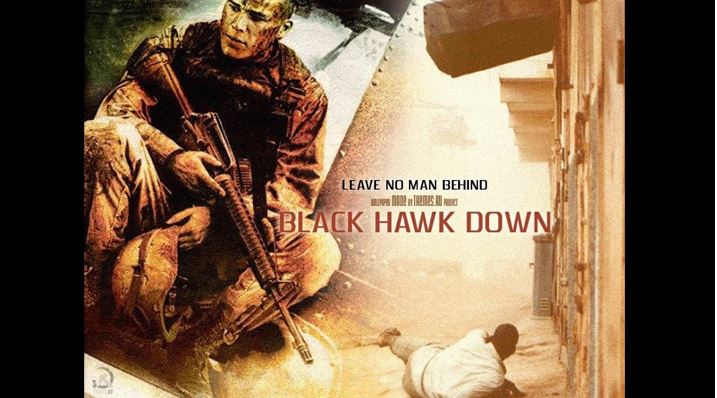 Black Hawk Down is a harrowing tale of the infamous American led raid of Mogadishu, the capital of Somalia – a Nation infested with pirates and terrorists. Black Hawk Down received mixed responses when it was released but has since gained a cult-like status amongst the lovers of the War Genre. Ridley Scott is the one behind the camera on this one. Not necessarily known for his dark and starkly realistic stories, he actually does a good job of bringing together a group of characters from diverse backgrounds and a rather non-linear plot into one coherent story arc. The powerfully jaded ensemble cast also deserves a lot of credit. Black Hawk Down is more or less very correct in terms of a factual perspective. Some fans consider that Black Hawk Down actually romanticizes combat and war, trying to make it look like to live the life of a soldier in the middle of battle somehow makes you cool. It fails to show how devastating it can be on the life of someone who would have never seen it coming. 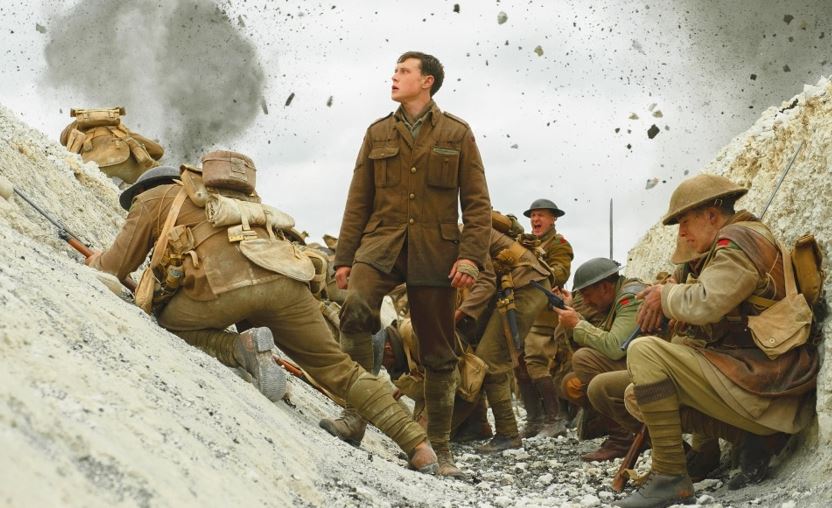 There are a lot of movies on World War Two but very little on World War One. 21st Century is trying to reverse that norm. 1917 is a brilliantly made movie about soldiers and friends trying to make it through enemy lines to relay critical information to one of their factions located at another faraway post. That faction is about to launch an offensive against the enemy but it is later found to be a trap and thousands of soldiers will be walking right into an ambush. 1917 is a beautifully shot Oscar award-winning movie. It has great visuals, amazing action, incredibly well-made screenplay, and an overall engaging plotline that will keep you on the edges of your seat. It also shows the century-old battle tradition of trench warfare in all its glory. 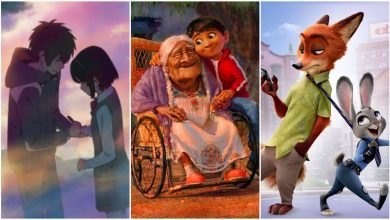 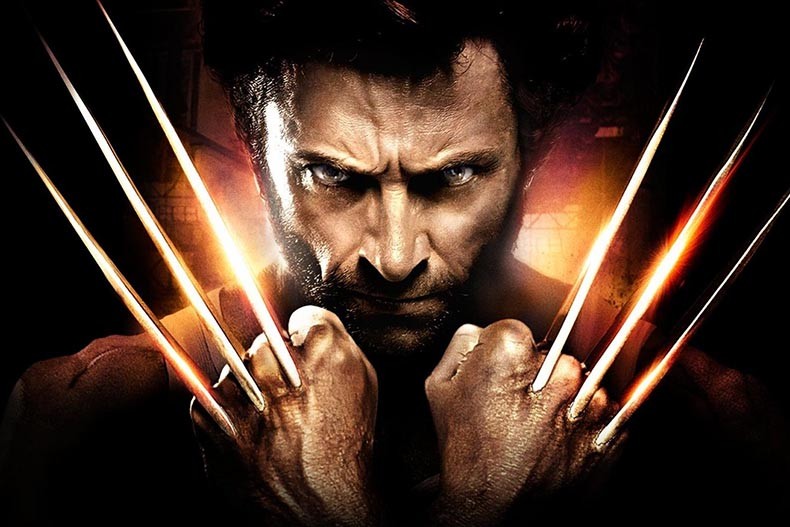