Goose the Cat made a lot of rounds on the internet this year. But people are probably not aware of the fact that in the comics, the cat is actually called Chewie. This Flerken has no relation with Chewbacca so don’t get confused there. It has been a major part of Captain Marvel’s storyline and is up to all sorts of shenanigans in the recent Captain Marvel comics.

The last few Marvel stories have been building up to the Absolute Carnage event. Cletus Kasady has been using his mind controlled drones in order to keep tabs on individuals such as the Thing, Spider-Man and a few others who have bonded with Carnage in the past. But in Captain Marvel #8, the symbiote has taken the attack to Captain Marvel’s pet cat Chewie. Things probably didn’t go so well for the Flerken because the comic left us believing that the cat may have died! 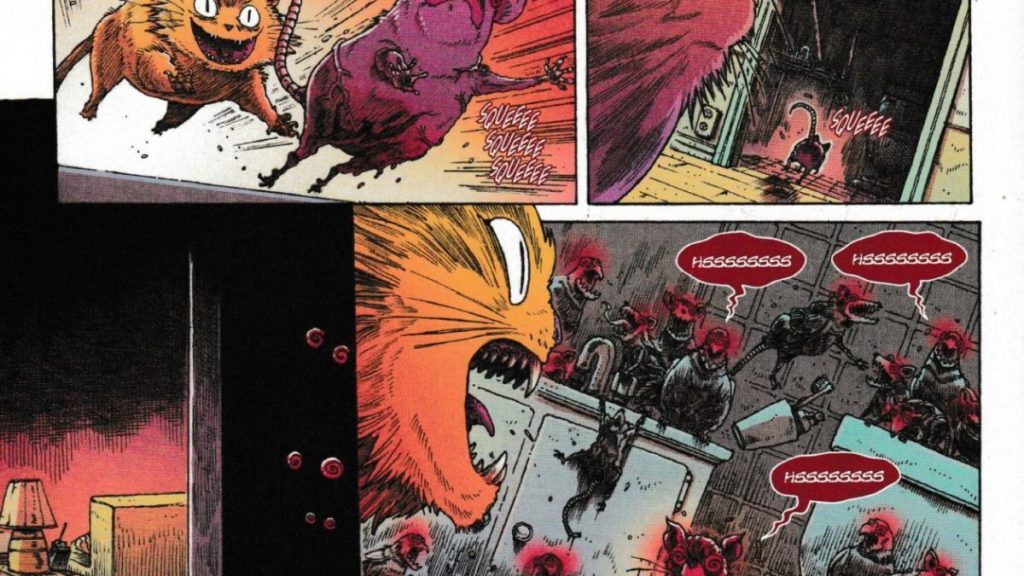 These days even comic book issues have post credits scenes. So, we see Chewie chasing a rat after the credits of the 8th issue. Well unfortunately, this rodent wasn’t a normal rat as it had red swirling eyes which tell us that it’s being controlled by Carnage. What follows next is the poor Flerken ending up in an apartment bathroom full of such Symbiote controlled Rats and birds. All those creatures surround Chewie and that’s probably it for him. 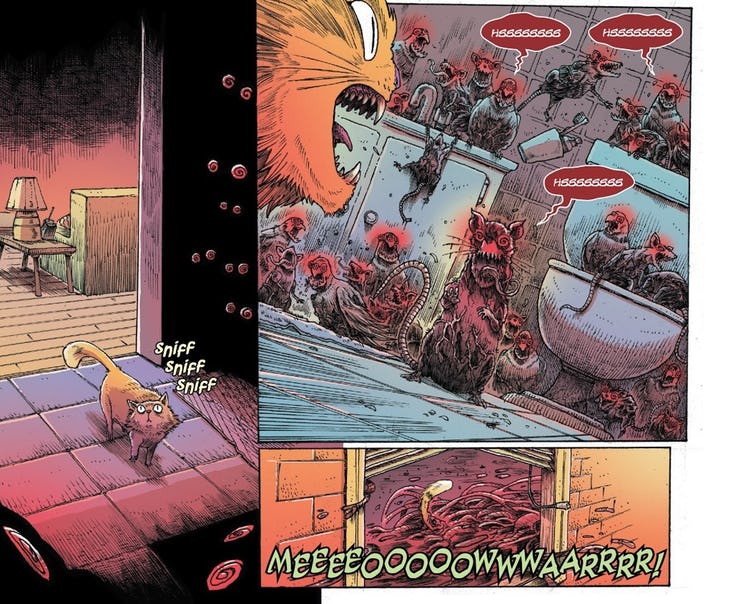 But does Chewie getting sucked into Carnage mean that he died? In the comics, we know for a fact that anyone could die and come back to life. But Chewie here probably did not die at all. There could be 3 situations here. Carnage could have either killed off the Flerken cat. Or, the Symbiote might just want to control the cat in order to get to Captain Marvel. Or perhaps this was just a move to remove Captain Marvel’s pet cat from guarding her. In any of these situations, Chewie’s future doesn’t look to be good, and neither does Carol’s. 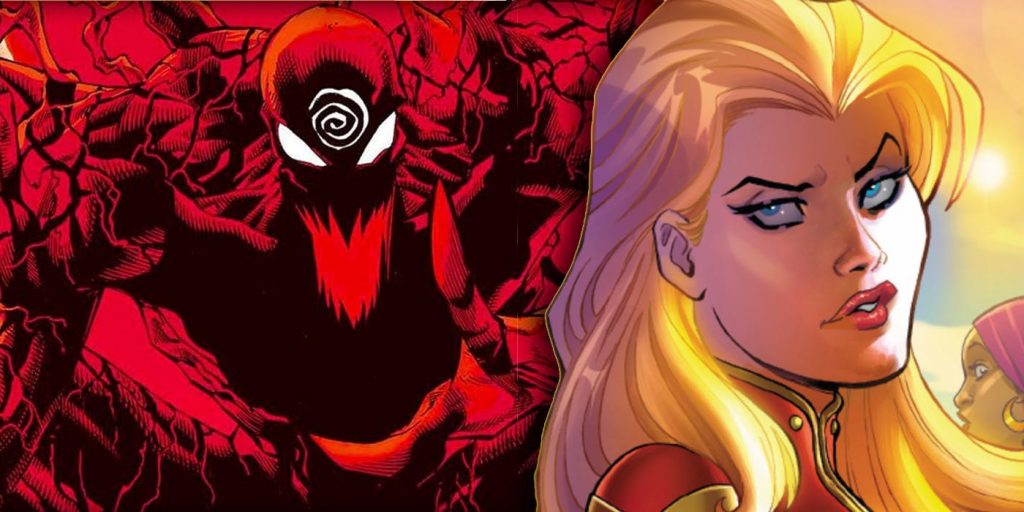 What if Carnage ends up controlling Carol? The entire Marvel Universe might be at risk since an already overpowered Symbiote could let Captain Marvel lose, and that will only bring chaos. We can only wish for such an event to take place on the big screen. There are rumors which suggest that Sony wants to bring Venom in Spider-Man 3. That could lead us to the pathway of having Symbiotes in the MCU.

Venom 2 will be hitting the theatres next year, and we can expect Spider-Man 3 to release in July 2022. That will actually be a great time to have a crossover. Venom mentioned that there are millions of other Symbiotes on his home planet. Imagine if a Siege event takes place on the big screen and the Symbiotes end up taking over the heroes of the MCU. Things would get a 100 times crazier! 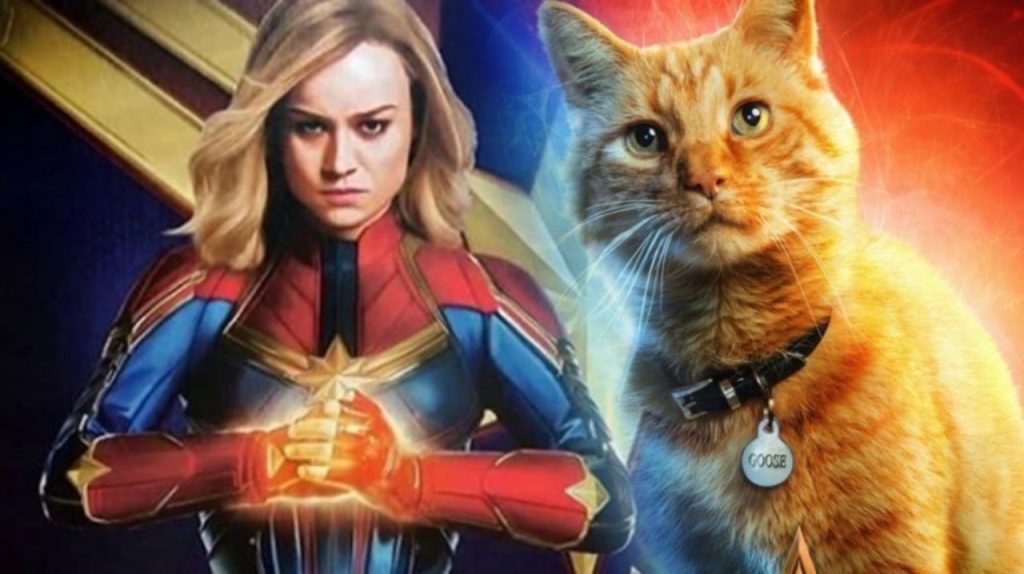 Circling back to Carol’s pet, what happened to Goose in the MCU? Where is the Flerken? Last we saw him, he spit out the Tesseract on Fury’s desk and got on to his own merry way. Captain Marvel 2 should explain what Goose has been up to. Has he been on Earth, or did Carol come back on Earth sometime before Avengers: Endgame and took him away? It would have been amazing to see Goose appear in the final battle during Endgame.

We certainly hope that Goose is alive in the MCU, and the Marvel comics universe as well. 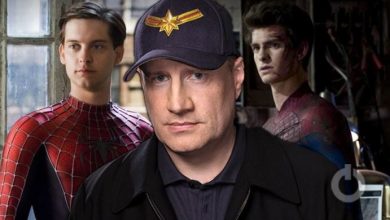 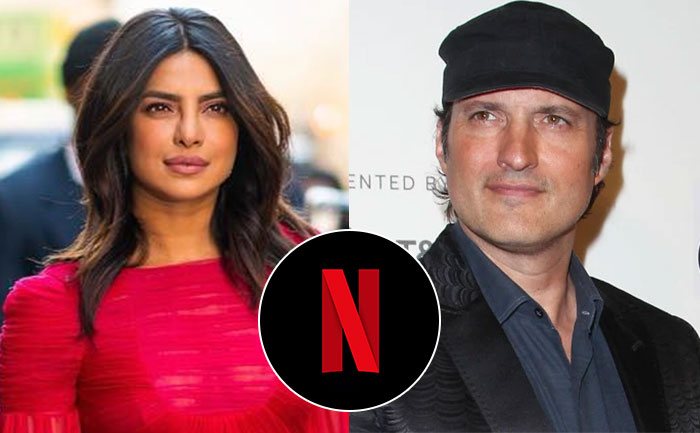 Priyanka Chopra is Going to Star in a Netflix Superhero Movie