It looks like all the hard work and dedication of Tom Holland and entire cast has paid off with first reactions pouring in after screenings at prominent places. Spider-Man Homecoming has exceeded the expectations of critics and will be another massive blockbuster Marvel movie. Now, after two days of the release of the film of the friendly neighborhood web crawler, it’s already being teased that he would make a bigger appearance in Avengers- Infinity War than he made in Civil War.

During a recent chat with Yahoo Movies, Holland said,

“It’s been crazy, man. It’s been a really really surreal experience. When I worked in the Civil War, I only worked with Robert and Chris very briefly.” Talking about his work in Civil War he said, “everyone else was sort of like I was acting with a tennis ball or all this sort of stuff. I saw everyone, but never got to work with them.”

“For this now, I’m in a situation where I’m on set with all these guys doing scenes, fighting bad guys. It’s been a real whirlwind. It’s been a lot of fun.” 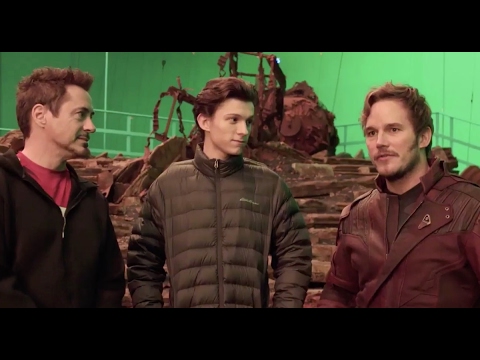 This comment of Holland on the new ensemble flick along with Behind the Scenes pictures of him with Robert Downey Jr. and Chris Pratt, who plays Star Lord are proof enough of his presence in Infinity War.

It’s not yet revealed if Spider-Man would have a one on one battle with Thanos or just face his henchmen but Infinity War with its big star cast, confirming the presence of Spider-Man in the climatic battle against Thanos, fighting alongside the Guardians of Galaxy and the Avengers sure is going to be a big present for the MCU’s tenth birthday.

You May Like: 5 Superheroes Who Should Crossover With Guardians of The Galaxy