Dwayne Johnson (The Rock) who is currently prepping up for upcoming new Jumanji film says that the film will not be a direct sequel. The 44-year old actor who just wrapped his shooting scenes from Fast 8 posted on Instagram about the upcoming film.

“And now in two weeks I’ll reunite with old friends Kevin Hart & Jack Black and we have the honor to introduce a whole new generation to the amazing world of #JUMANJI. *(for the record we are NOT making a reboot, but rather a continuation of the awesome JUMANJI story). It’s also crazy to me how much me, Kev and Jack look like triplets when we’re together. 👶🏽👶🏻👶🏿. Man this is gonna be FUN.” wrote Johnson. 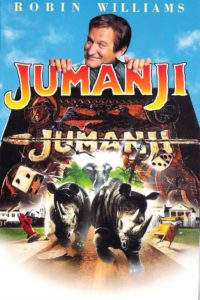 This time, Dwayne Johnson will reunite with his ‘Central Intelligence’ buddy Kevin Hart and ‘The School of Rock’ actor Jack Black. With them, the story is definitely going be different than earlier cast. This is going be fun for all, especially for 90s kids.

In the 1995 original, the game vanished on an unknown beach. This would definitely bring something unique turn when someone else would discover the game after that. Last time the film incorporated the time-travel phenomenon. Now the hardest part is “who is going to play the younger Johnson in the film”.

Jake Kasdan, the director of 2011 Bad Teacher, will be directing the film, with Ted Field, Lauren Selig, William Teitler, Matthew Tolmach and Mike Weber working as producers. The film is set to release on July 27th, 2017.

What do you think ? Sound off down below.