In the Game of Thrones, we had one red priestess Melisandre who worships the Lord of Light, she read the flames and convinced Stannis Baratheon that he is “the Prince who was promised”. She helped him eliminate his brother Renly Baratheon by creating a shadow monster with her mystical abilities, as a result, a substantial chunk of his army merged into Stannis’s forces, which emboldened him to attack King’s Landing in the Battle of Blackwater. He failed in his attempt to capture the capital, then went North with sellswords, failed again and this time for good. 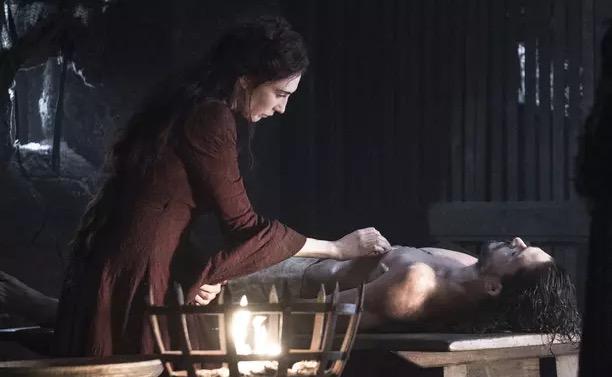 Meanwhile, at Castle Black Jon Snow was repeatedly stabbed by his own men in a brutal mutiny led by Alliser Thorne, as they had lost faith in his leadership. He paid the price for being an upright Lord Commander who thought about the greater good of the realm, instead of narrow interests of the Nights’ Watch. But he was resurrected by Melisandre through her red magic, and she has now submitted herself to the service of Jon Snow as she believes it’s him whom she saw in the flames – the Prince who was promised instead of Stannis Baratheon. There is a strong case that it could actually be him after everything is said and done.

On the other hand, we have a new red priestess Kinvara who is being introduced into the show, she met Tyrion Lannister and Varys in the ancient city of Meereen. There is a difference of opinion between Tyrion and Varys on whether they should invoke religion to placate the city on the brink of civil war or should they maintain distance as it’s too risky and unpredictable. Lord Varys is close to being an atheist character in the show who is also an advocate of peace and stability in the realm. But for the first time, we saw Lord Varys profusely sweating in a conversation when she said to him “Knowledge has made you powerful, but there is still a lot that you don’t know”. She insisted that according to the ancient prophecy it’s Daenerys Targaryen who is “the Prince who was promised”. She has a much stronger case now as she commands massive Dothraki forces, dragons and savvy advisors by her side.

The prophecy was written in Old Valyrian which is “gender neutral”. Who is it going to be? Who is right? Melisandre or Kinvara?