No one can indicate the precise origins of the kombucha bacteria (or the kombucha mushroom) but it was surely used in the 220 BC during the Tsin dynasty. The tea made from the kombucha ferment has been appreciated for more than 2000 years and thanks to its miraculous effects on the body it was called “the tea of immortality” or the “elixir of life”. This type of tea was also brought in Russia and Japan and it seems that in this last location the tea was given the name of kombucha in 415 A.D. It is said that emperor Inyko got sick and was treated with kombucha by a doctor named Kombu and thus the name of tea was born.

The kombucha mushroom isn’t really a classic mushroom – it looks like an American pancake and it actually consists of an entire colony of 12 microorganism species. The colony itself comprises “friendly” bacteria and mushrooms that transform the environment they live in (preferably rich in sugar and black or green tea) in substances that help in boosting our health. As a reminder, replacing sugar with honey when preparing the special tea will only destroy your kombucha mushroom. Why? Because honey contains a natural antibiotic that will immediately attack the colonies of bacteria, which are biotic (or, more precisely, probiotic). You can add honey in the glass you drink the tea, but not in the container where you keep the mushroom. Moreover, it is best to consume the drink when its pH is below 4 (and thus, gains a bit of a sour taste).

During its fermenting process, the kombucha mushroom can produce a series of nutrients and vitamins, such as:

Other benefits of the kombucha mushroom are:

If you aren’t completely convinced, you can try it yourself and here’s a recipe you can use to prepare your own kombucha tea: 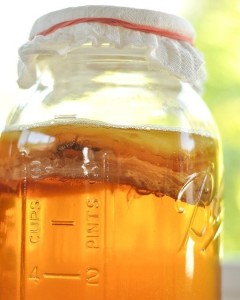