J.K. Rowling created a lot of exceptional characters. But the best among them was Severus Snape. The enigma of his actual allegiance is the most gripping aspect of the series. We don’t get to know the truth till the closing act of Harry’s final adventure. Snape was working for Dumbledore all along. He was devastated by the loss of Lily Potter. He was even partly responsible for it. Snape swore to assist the Hogwarts headmaster and honor Lily’s sacrifice by protecting her son.

This revelation was the final proof that Snape is more of a hero than a villain. You cannot deny Snape’s capacity for villainy. He is brave but also kind and generous. He has an aura of intimidation and relishes in the mistreatment of those he considers inferior. It is surprising that so many students hate him. Only the Slytherins have got something good to say about the dreaded Potions Master. When he was at the youth stage, Snape’s interest in dark arts led him down a path where most of the characters won’t dare to tread. He has certainly redeemed himself in later life but his work for the Dark Lord is almost unforgivable.

1. Refused to listen to Sirius’s Story 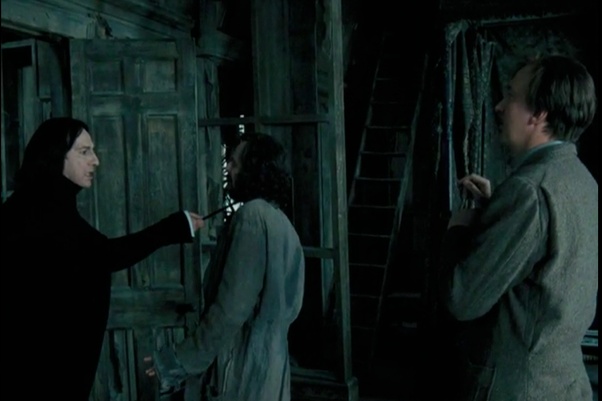 The Prisoner of Azkaban introduced Sirius Black to the Potterverse. The plot explored his relationship with Harry’s mother and father and the motivation behind his escape from Azkaban. As a final act of the story, Sirius starts to tell his story whilst in the Shrieking Shack. But in the middle of his explanation, Snape appears and puts a stop to the proceedings. Harry, who is desperate to learn the truth, is angry about Snape’s intervention. He yells:

“You’re pathetic! Just because they made a fool out of you at school you won’t even listen.”

2. Tells Voldemort about the prophecy 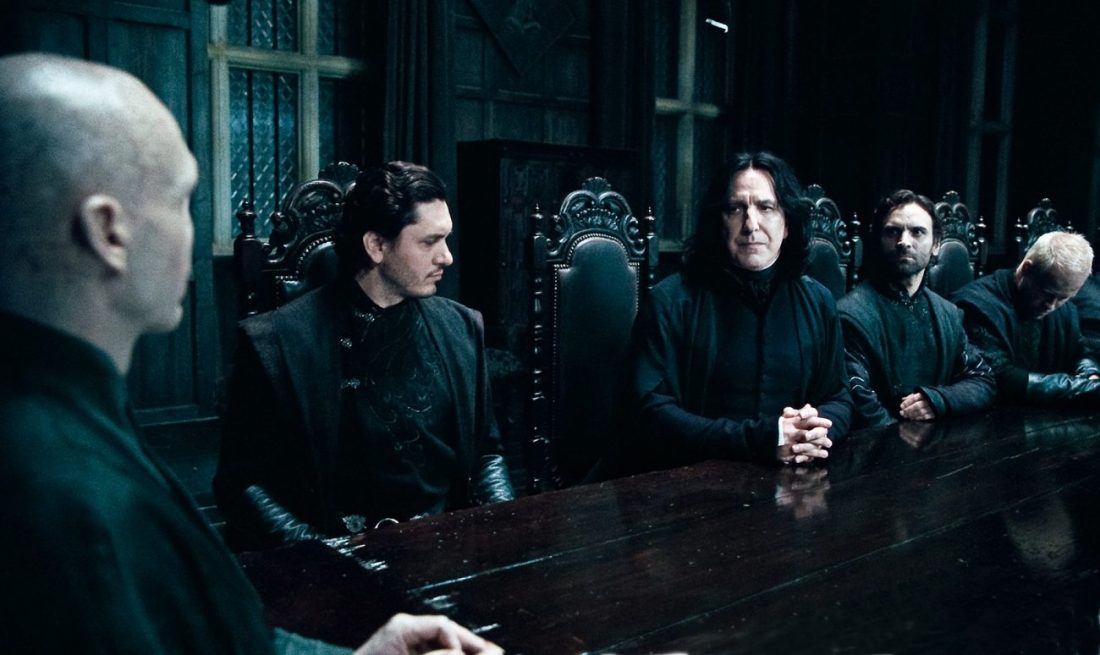 There was a bad thing that Snape did but the filmmakers managed to leave this important piece out of the story. During a job interview with Dumbledore at the Hog’s Head, Professor Trelawney falls into a trance. He delivers the famous prophecy about Harry and Voldemort. Dumbledore is the only one who experiences the prophecy completely. But a young Death Eater also overhears a few of Trelawney’s words. 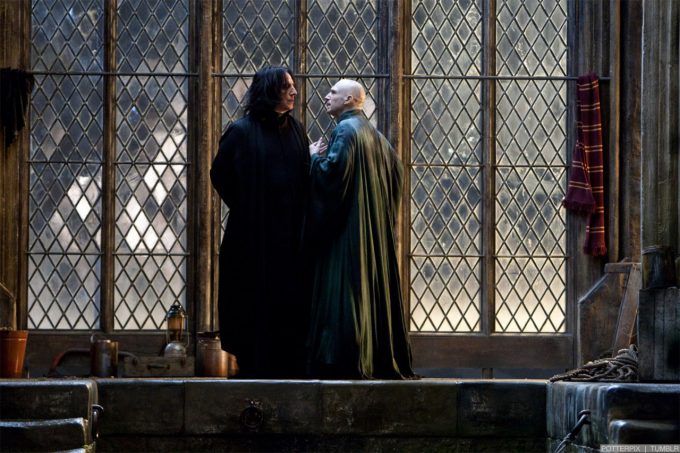 Snape runs to tell his new master and Voldemort sets his eyes on the Potter family. This is a terrible crime to commit since Snape knew a child was going to get killed if he told his master the truth. Moreover, when Snape realizes that the Potters are in danger, he requests Voldemort to spare Lily. He also demonstrates his total disregard for those Lily cares about. The death of Harry and James doesn’t matter till Lily remains safe. 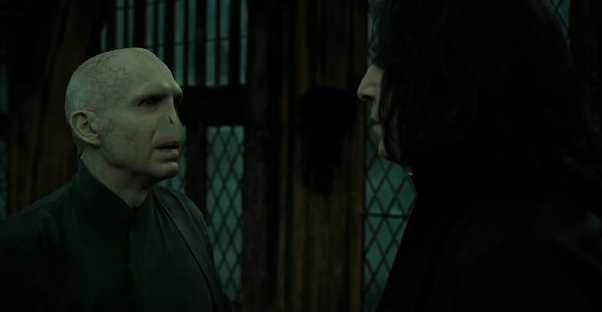 When Snape comes to Dumbledore for asking help, the headmaster instantly points out his selfishness:

“You do not care, then, about the deaths of her husband and child? They can die, as long as you have what you want?”

Before long, the inevitable happens and Snape mourns the death of Lily. It is hard not to feel sorry for him but Snape’s villainy was the cause of his own misery. 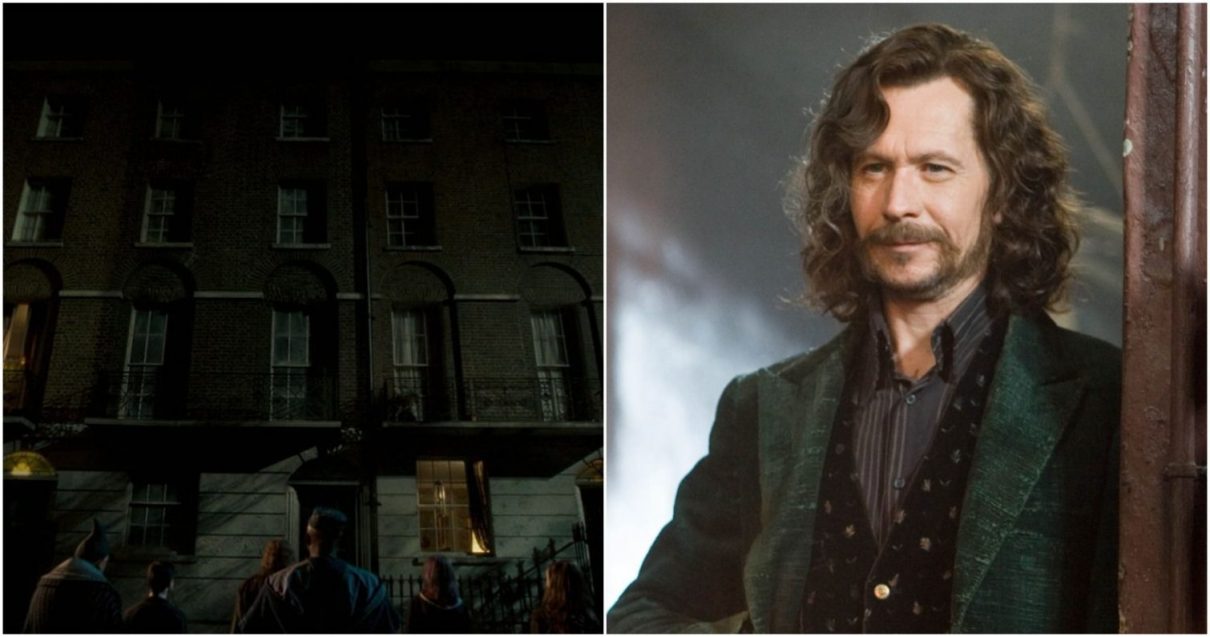 James and Sirius were very nasty to Snape. Snape never got over the torment he suffered at their hands. When Sirius is forced to hide because of the ministry’s false belief that he is a mass murderer, Snape is instant to criticize. This might look like a minor offense, but Sirius hated being cooped up in his mother’s house. Snape was well aware of this.

By goading his old school rival, Snape contributed to Sirius’s sense of frustration and made him keen to run off to the Ministry and help Harry. While this would be an exaggeration to blame Snape for Sirius’s death completely, he surely contributed to this tragic event.

4. Inventor of the Sectumsempra Curse 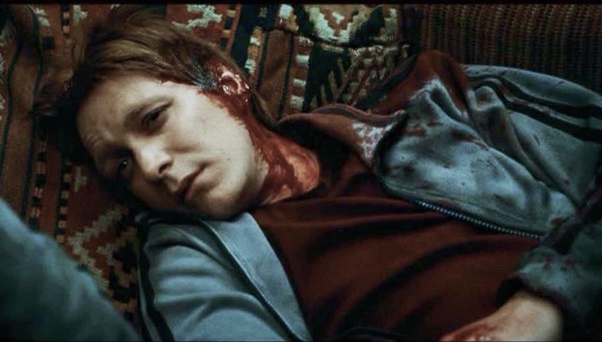 During his teen years, Snape became an expert when it came to potion-making and dark arts. But he was more than only a smart student. He also invented his own magic. The deadliest spell that he invented was the Sectumsempra Curse. It causes huge gashes to erupt across the victim’s body and leads to excessive bleeding. The reason is unknown why Snape invented this curse. But only a deeply disturbed individual can create such a type of curse. 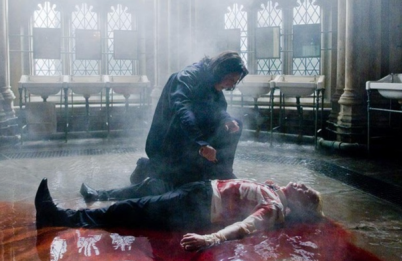 The curse is used twice in the franchise. Harry uses it on Malfoy in The Half-Blood Prince and Snape uses it himself in The Deathly Hallows. Considering the devastating effects of the spell, it should be classified as a fourth Unforgivable Curse.

5. Insulted the appearance of Hermione 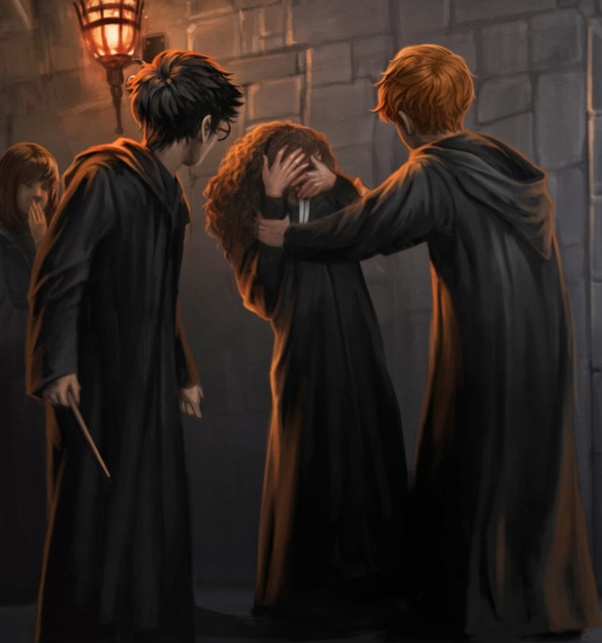 In the middle of The Goblet of Fire, Snape’s mistreatment of students hits an all-time low. After a brief duel between Harry and Malfoy, Malfoy unintentionally hits Hermione with a hex. It causes her front teeth to grow alarmingly fast. She tries her best to cover it up, but before that, her teeth have grown past her chin. Instead of taking pity on Hermione, Snape is just horrible to her:

“Malfoy got Hermione! Look! I see no difference.” 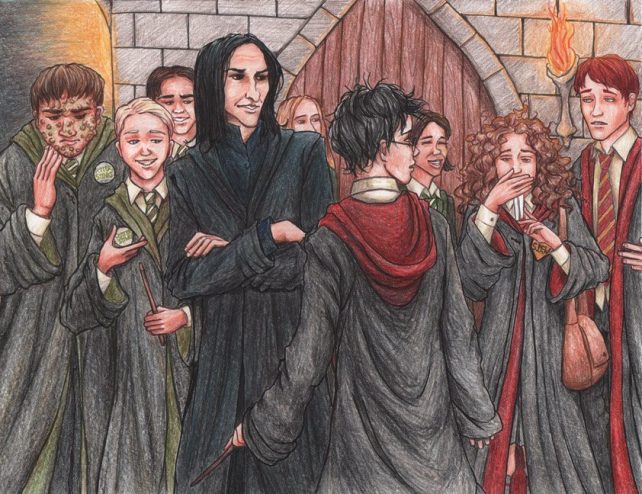 In the books, Rowling has described Hermione as having large front teeth. So Snape’s comment has been purposefully designed to ridicule the aspect of her appearance. It is not surprising that Harry and Ron start to shout at the Potions Master. But unfortunately, both of them are given detention. 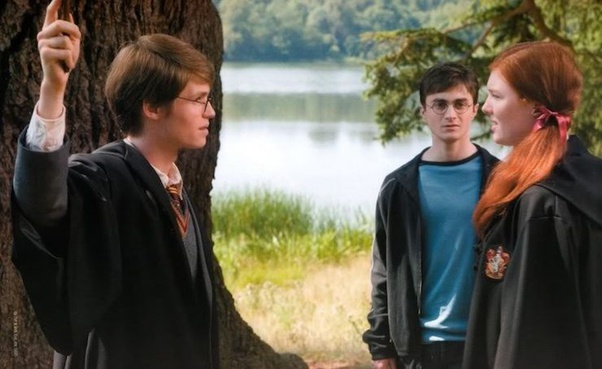 This is a moment that is absent in the movies. James and Sirius start to abuse Snape in front of a sea of onlookers. They rob him of his wand, turn him upside down and make him cough up soap suds amongst gales of laughter. Lily comes to put a stop to their antics. She asks them to leave Snape alone. But instead of thanking Lily, Snape says he doesn’t need her help since she is a ‘mudblood’. 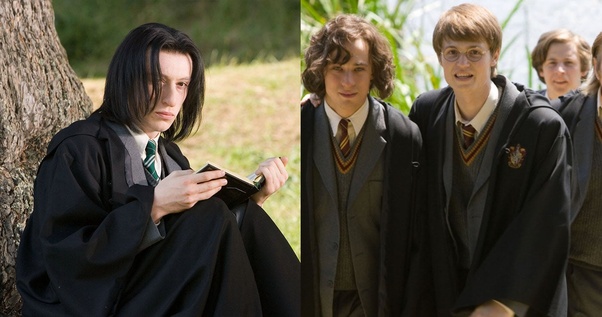 Along with being ungrateful, this is a foul thing to call someone who is Muggle-born. Towards the end of The Deathly Hallows, we get to know that Snape apologized later on. But Lily didn’t forgive him and severed their friendship permanently.

Voldemort is considered to be the most villainous wizard. He has no desire for friendship or love. He seeks only power and immortality. Everyone in the wizarding world has been repulsed by the values he holds dear. But there are always exceptions. The Dark Lord’s followers are called the Death Eaters. They support their master’s vision. They believe that pure-blooded witches and wizards should be in positions of power and Muggle-borns must be removed from society.

Snape, as a result of being bitter and downtrodden after his years at school, joins the Death Eaters along with many of his schoolfellows. This also includes Lucius Malfoy. Rowling never unveiled when Snape became a Death Eater, but he presumably made the decision shortly after leaving Hogwarts. While Snape redeemed himself in later life, it is hard to forgive someone who willingly joins the Dark Lord. 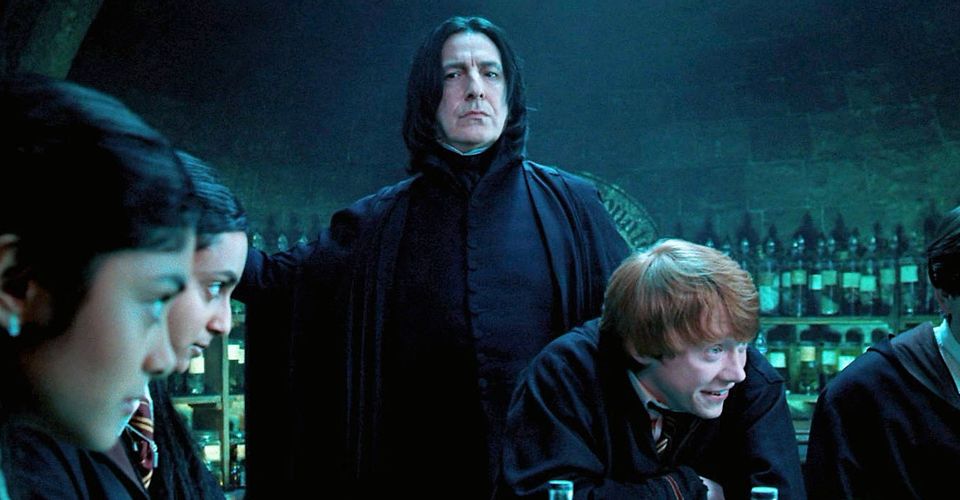 In comparison to other actions, Snape’s childish habit of favoring students in his own house is very pathetic. The house points fall into irrelevance as soon as the series goes on. But the students at Hogwarts consider it as a part of their experience and enjoy the communal effort to gain points and represent their house. Snape is well aware of this fact. He abuses the power wields and wastes no time in punishing students for small offenses that most of the teachers would pass over. 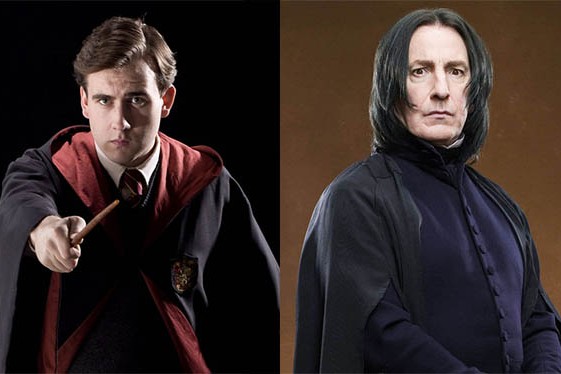 A lot of students suffer this nastiness more than others. A good example is Neville Longbottom, who is constantly bullied by Snape. But the Slytherins are praised for the smallest achievements and their mistakes are always ignored by the Potions Master.

9. Fails to teach Occlumency to Harry

In his fifth year, Harry has to contend with the cruel remarks of his fellow students and the villainy of Professor Umbridge. The worst part is he has to learn Occlumency from Snape. Harry is supposed to be riding his mind of all emotions and stop Voldemort from penetrating his mind. But Snape’s teaching methods are useless.

Snape spends more time throwing insults instead of teaching. It is not surprising that Harry is not able to rid his mind of all emotions. Following Harry’s trip into Snape’s teenage memories, the Occlumency lessons are stopped altogether. Harry is relieved about the change of circumstances. But Snape’s decision to stop the lessons is ludicrous. This leaves Harry’s mind open to manipulation and allows Voldemort to plant a false vision inside his head.

10. Hates Harry since he hates his father 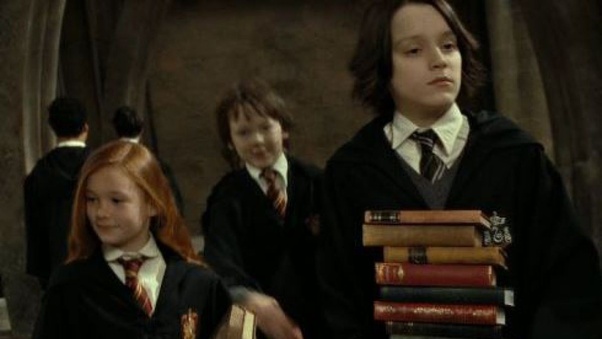 Snape hated all four of the Marauders. But he hated James the most. The hatred intensified when he started to date Lily. Definitely, Harry looks like his father. He is a visual reminder that Lily loved Snape’s greatest rival. That’s why the Potions Master takes an immediate dislike to him:

“…mediocre, arrogant as his father, a determined rule-breaker, delighted to find himself famous, attention-seeking and impertinent.” 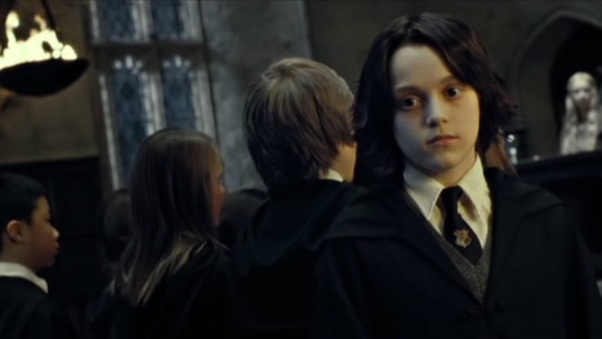 “You see what you expect to see, Severus.”

Snape’s attitude is understandable. But judging someone like that is childish. In the first Potions lesson, Snape embarrasses Harry in front of the class. This hate-fuelled relationship intensifies as the series continues, accumulating with the murder of Dumbledore in The Half-Blood Prince. Snape was undoubtedly heroic in many situations. But he had no right to give such a hard time to Harry.