Avengers Infinity War changed the landscape of the Marvel Cinematic Universe when Thanos destroyed half of life in all creation in quite the traditional fashion. We saw the Mad Titan take on the might of earth and the entire allied forces of the cosmos and smash their faces in. The entire premise was a bit reminiscent of the original saga of Infinity War in Marvel comics. The original saga saw Thanos break out of his home planet of Titan and from his kingdom in the dark quadrant. The Mad Titan Thanos has been on a quest for the infinity gems for a long time. He has a thirst for blood. A thirst that can only be quenched by the death of half of all life in creation.

This is what Infinity War showcased, the immense and unique chance thirst of Thanos and the kind of consequences it brings forward. We see the Mad Titan go against the might of the cosmos and come out victorious. The only problem is that Thanos is doomed to fail. Why? Because the Marvel Cinematic Universe is a Disney franchise and the heroes never loose permanently in a Disney movie, no sir, that would be too close to reality and would completely mess up the utopia they are trying to portray.

Anyhow, it seems rather apparent that come Avengers 4 we will see an over complicated and overhyped story of how the remnants of the snap band together to take down the Mad Titan and restore the universe to its former glory.

In one of the latest viral theories on Reddit, it has surfaced that Disney might be planning to inculcate the Fox characters in a much more prominent role than previously anticipated. So much so, that the next string of villains (Throwaways and the series 2 main antagonists) will be from the Marvel properties currently owned by Fox.

The fandom is of the opinion that characters like Doctor Doom and Magneto will take centre stage come Avengers 4 and Marvel Cinematic Universe Phase 4. It is the speculation of the fans that we are pegged to see universes collide and new threats emerge deep from the entrails of the universe. One threat that the fandom seems especially worries about is the world ended Galactus.

But who is this Galactus and why is the fandom so afraid of a world ended when our current heroes are already battling against a universe wonder. The answer is simple, Galactus is much more of a threat to earth and Avengers than Thanos ever could be, even if he possesses the infinity gems. Although Thanos might exceed Galactus in pure raw power with infinity gems but the world eater has millions of years of a head start on the Mad Titan and he is much more of a formidable foe.

Galactus created the surfer on a whim. He created a cosmic being on a whim. That is not the kind of power that should be trifled with. It is the expectation of the fandom that with the advent of Avengers 4 we will see the Marvel Cinematic Universe go through a soft reboot. Once that happens then the new content so taken over from fox can be included in the franchise (Or rather injected slowly into the budding phase 4) with Galactus as the main antagonist of the second series. The role can just as easily go to someone like Doom or Apocalypse, but those villains will need a lot of set up and buffs, on the other hand all Galactus needs to do is show up on earth and chaos will erupt. 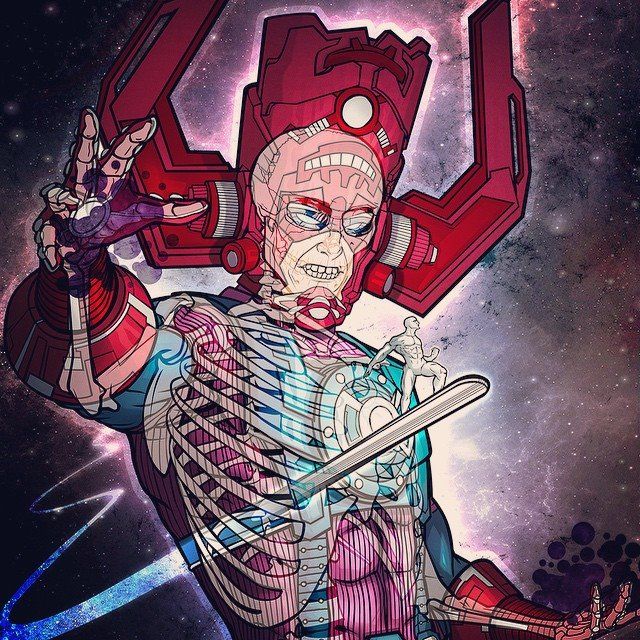 The Avengers have never faced a threat of this magnitude and their deaths are all but confirmed if push comes to shove against Galactus. Doom is also a viable option, but we expect that the writers will choose to use him as a secondary antagonist who will redeem himself at the end of the series arc (think Loki from MCU phase 1-3). What do you think? Do you think Galactus is the next big villain Marvel is looking for? Let us know in the comments below.