In part 1 of this article, we mentioned some of the scenes from the Harry Potter books that were not shown in the movies. The list, of course, includes a lot more so let us continue with it:

In the last part of Sorcerer’s Stone, the trio goes through the trapdoor(guarded by Fluffy) to find that there are many more obstacles before they reach the sorcerer’s stone. Almost every teacher has put an obstacle and while the movie gives us some of them, it skips a few. We see Prof. Sprout’s Devil’s Snare, Prof. McGonagall’s Transfiguration chess and Prof. Flitwick’s charmed keys. The movie misses Snape’s potion puzzle which would have been interesting to watch. Snape being the potions master puts a table of different potions which contain poison and what not and Harry had to drink one to go through. Hermione comes to the rescue and cracks the code to find the right potion!

As we all know Hermione has always been an activist and cares about all kinds of creatures. In her fourth year, Hermione forms a society known as the Society for the promotion of Elfish Welfare aka SPEW. She forms the society after seeing a house elf being mistreated. Hermione for president!! 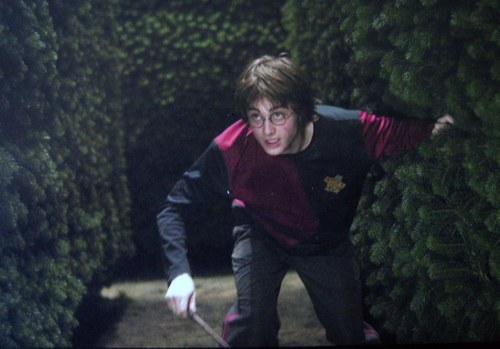 In GOF we see Harry get through the three tasks of the Triwizard Tournament by crossing various obstacles. Well in the book there were more of them. in the last task that is the maze, the movie didn’t show how vicious the maze was. In the book, the maze had many boggarts that transformed into Dementors for Harry and there was a sphinx. The sphinx gave a riddle to Harry that had to be solved in order to go ahead and this time Harry solved it without Hermione’s help.

In the movies, we never got to know what happened to the filthy Wormtail but in the book, his death is rather interesting. When Harry and Ron were put in a cellar in Malfoy Manor, worm tail kept a watch on them and later he was the one who released them too. This was kind of an act of redemption on his part but it caused his death too. Remember in GOF Voldemort gives a fake hand to Wormtail after he sacrifices his hand to bring back the dark lord? Well, that hand strangles him at the end when he shows disloyalty to Voldemort by releasing Harry. So its disloyalty that kills him in the end…Karma is a bitch!

poSo we know that the story has many father figures for Harry be it Sirius, Lupin, Hagrid or Dumbledore. But in the last book Harry becomes a father figure for someone too. When Remus and Tonks have a kid, Remus asks Harry to be the Godfather of their child. Remus visits Harry after the birth of his son and asks him to be the Godfather. It is a very emotional scene and it is not even mentioned in the movie. It is a very important scene because Harry could never have his own father in his life.

Fun fact: Teddy Lupin, the son of Lupin and Tonks has some of the powers of his mother since birth. Nymphadora Tonks is a metamorph magus that is she can change her physical appearance at will.