J.K.Rowling has described Hermione Granger as a beautiful, young and brightest wizard. Ginny Weasley too had immense courage and looked gorgeous. But they both looked absolutely stunning in three scenes filmed in Harry Potter Series. Here are three looks of Hermione and Ginny which took the breath away. 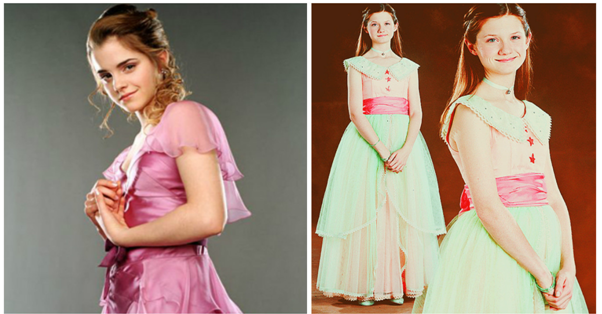 Yule Ball was organized during Triwizard tournament at the Hogwarts as per the tradition in Harry Potter And Goblet of Fire. Hermoine and Ginny looked nice in previous parts but they stole the show during the Yule Ball. Hermoine dated Victor and Ginny dated Neville at the Ball.Hermoine wore a designer pink dress, which gave her a Diva look, on the other hand, Ginny wore a cute pink and green color gown. She looked like a princess. They both dazzled at the ball. Though Hermione became the limelight at the ball, girl in Ginny bubbled like a smart girl in the Ball. When Hermione entered everyone got frozen. She looked so amazing that it became hard for even girls to lay eyes out of her. This was the first time Hermoine was portrayed as a young charming girl. 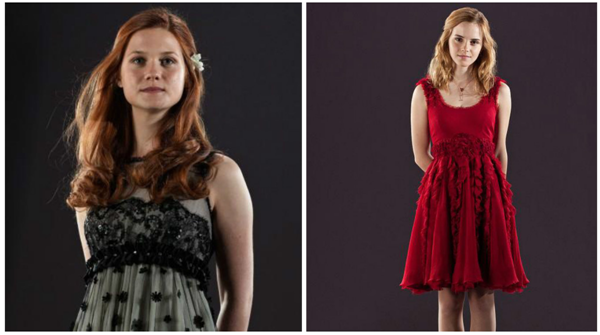 It was Ginny’s brother’s wedding so she had to look awesome by default. But Hermoine too looked amazing in her red dress that she wore for the wedding.Ginny wore a  black color sequenced dress which complemented her skin tone. Ginny was looking so beautiful that Harry’s eyes got stuck on her for a moment. Hermione also looked like a celebrity that night. The demons attacked the wedding so Hermione had to escape with Harry and Ron leaving everyone including Ginny behind. No one can refute the fact that these girls have got great dressing sense. 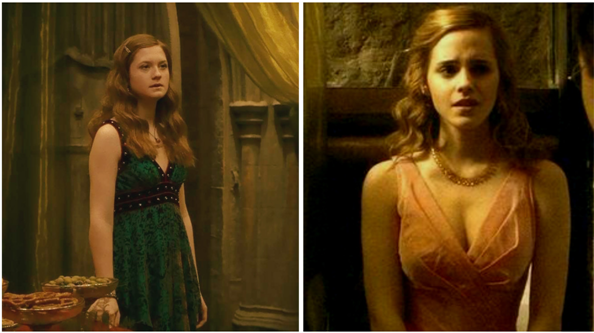 Professor Slughorn organized a dinner and a party for his students in Harry Potter and Half-Blood Prince. Ginny comes late at dinner, that was the end of the scene, she was crying, because he and his boyfriend had a fight. She looked very beautiful in her black dress and styled hair. Harry even stood up when he saw her. In the same movie when the professor threw a party, Hermione looked stunning. She was dressed up in a pink smartly fitted dress which enhanced her beauty. She too appears for a short while in the scene. She was trying to escape from his date who was trying to kiss her. They looked fabulous in their teens.