It’s quite obvious that Chandler Bing was easily the funniest character on the widely loved sitcom Friends. Incredibly sarcastic, the man always brought the best humour to the show. Chandler never took himself too seriously and was always the first one to make a wisecrack about someone or even himself. He didn’t like it when others made fun of him, though. Chandler isn’t the greatest at giving advice but according to him, he can interest you in a sarcastic comment. Let’s take a look at some of the funniest and most relatable Chandler Bing quotes from the show: 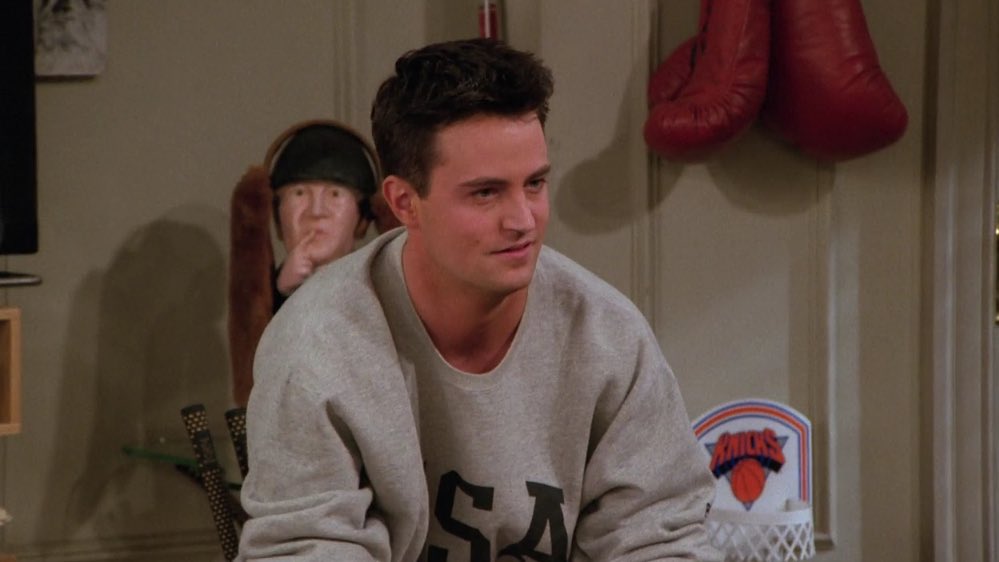 In an episode where Phoebe is talking to the gang about how she turned down David’s proposal in Barbados, Chandler chimes in and says “she’s right, if I were a guy and…” He then pauses and realizes what he just said. “Did I just say ‘if I were a guy?'” The audience laughs hysterically. This line is so funny because Chandler isn’t exactly the manliest of men and has a bit of a feminine side to him. He’s not gay, but he’s not afraid to take bubble baths after a long hard day at work. The best part of it is that Chandler totally embraces this side of himself. 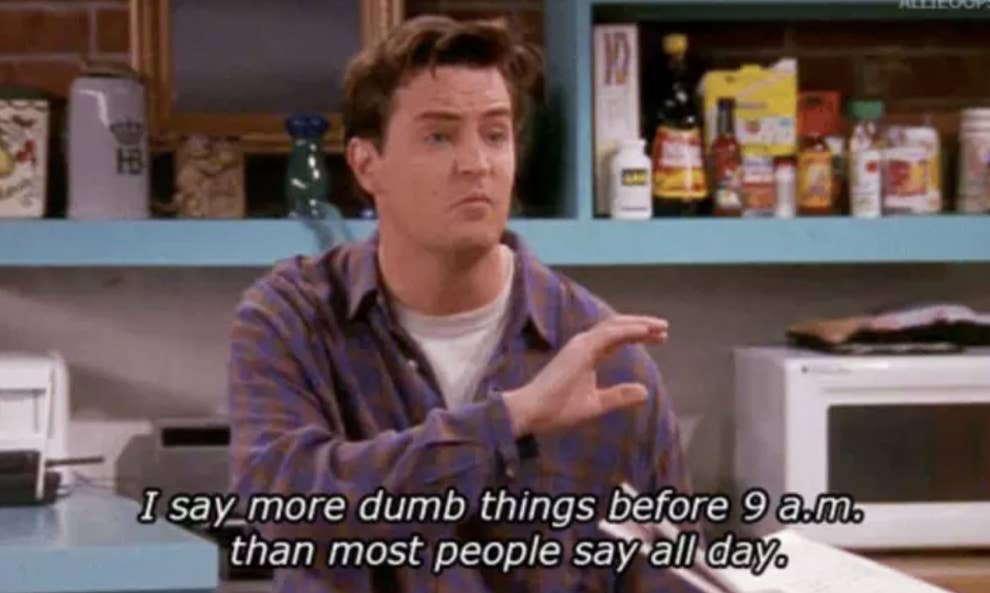 Sticking with his tendency to call himself out on his own crap and poke fun at himself, Chandler admitted to saying a lot of dumb things and he wasn’t afraid to do so. Chandler has his flaws, yes, but the reason why he is so likeable is that he embraces them and owns up to them. He knows he’s not perfect and doesn’t pretend to be someone he’s not, which is what makes his character so great. Even though Chandler does say dumb things a lot of the time, the things he says are actually pretty genius when it comes to comedy.

3) “So it seems like this internet thing is here to stay.” 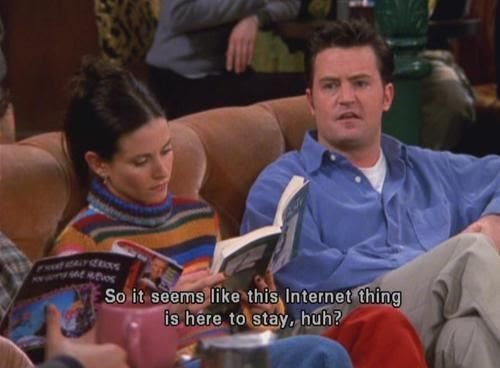 One of the many reasons why Chandler was so hilarious is because he would randomly say whatever was on his mind. Random comments were his speciality. One such comment came in a scene when everyone was in the coffee shop quietly reading something except Chandler, of course. Out of nowhere, Chandler says “so it seems like this internet thing is here to stay, huh?” He doesn’t quite know what to do with silence. If he’s not able to make a silly comment or joke about something, he just doesn’t know what to do with himself.

In an early season one episode, Ross is on the phone with someone from his job at the museum, talking about early species of humans. Ross is correcting his co-worker on the phone saying that Australopithecus wasn’t supposed to be in a certain display that they had him in because, unlike Homo habilis, Australopithecus was never fully erect. Chandler takes this opportunity to make a joke and says “well maybe he was nervous.” Ross just looks at him as if he’s annoyed. 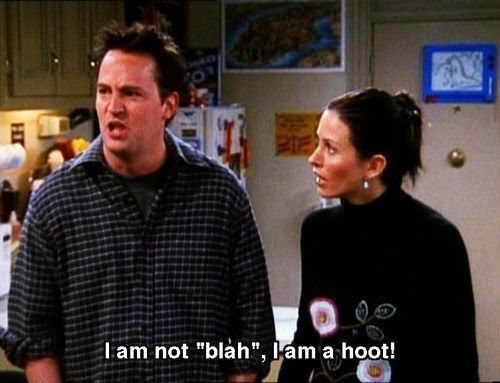 Joey once dated a woman who wasn’t too fond of Monica and Chandler. They went on a double date one night and Joey’s date, Janine, said that she doesn’t really enjoy spending time with them and wanted to get out of spending two nights in a row with them. Joey tells her that Monica and Chandler are his best friends, so if she doesn’t like them, then it will be a problem for him. Janine says that Chandler is a bit “blah” and that Monica is a bit loud. Once word of this gets back to Chandler, he gets offended and says “I am not blah, I am a hoot!” 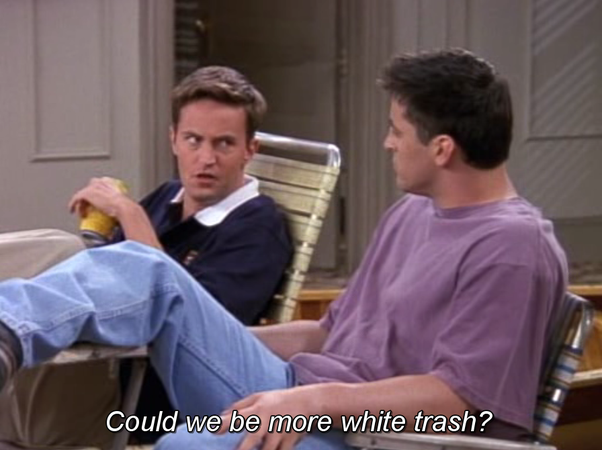 In one episode, Chandler and Joey get everything stolen from them in their apartment, so they are without furniture. They end up getting a canoe and some lawn chairs to sit in their living room. This was during the time when they had the baby ducks. So Chandler looks around their living room while sitting in a lawn chair drinking a beer and says to Joey, “could we be more white trash?” with an emphasis on the “be.” With the lawn furniture, the canoe and the baby ducks, they definitely came off as being very white trash making it one of the funniest Chandler Bing quote from the series. 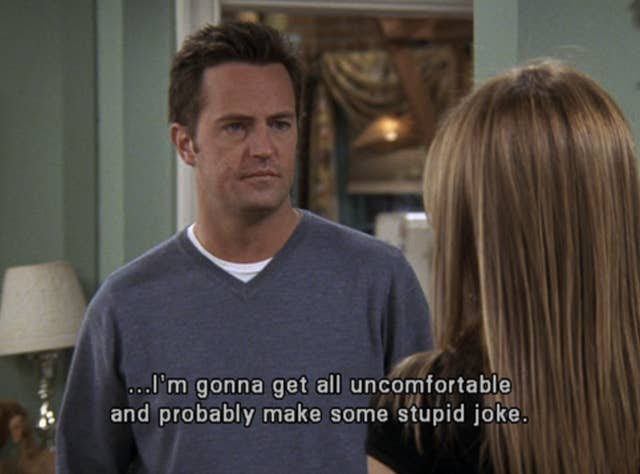 When Monica and Chandler bump into Monica’s ex-boyfriend, Richard, and his date at a restaurant, Monica comments on the fact that Richard’s moustache is back and then Chandler points out that Richard’s date doesn’t have a moustache. Noticing how incredibly awkward his comment was, Chandler introduces himself to Richard’s date by saying “Hi, I’m Chandler, I make jokes when I’m uncomfortable.”

8) I’m hopeless and awkward and desperate for love!”

One of Chandler’s most popular quotes that have made its way around the internet in gif form was when he declared who he was with no shame. A lot of us can relate to being hopeless and awkward and let’s be honest, desperate for love. The reason why this quote is so darn funny is because it’s not normally something one would declare about themselves. What makes Chandler so awesome and relatable is the fact that he isn’t afraid to admit his flaws or that he’s incredibly awkward.

In an episode when Monica is telling Joey to talk to Rachel about his feelings for her, he says that he can’t and that Monica and Chandler don’t know what it’s like to put yourself out there and get shot down. Chandler then responds and says “I don’t know what that’s like?! Up until I was 25, I thought the only response to ‘I love you’ was ‘oh, crap!'” Monica also mentions that she knows what it’s like to be rejected, saying she got shot down at a fat camp. “Boy, kids are mean when they’re hungry,” she said. 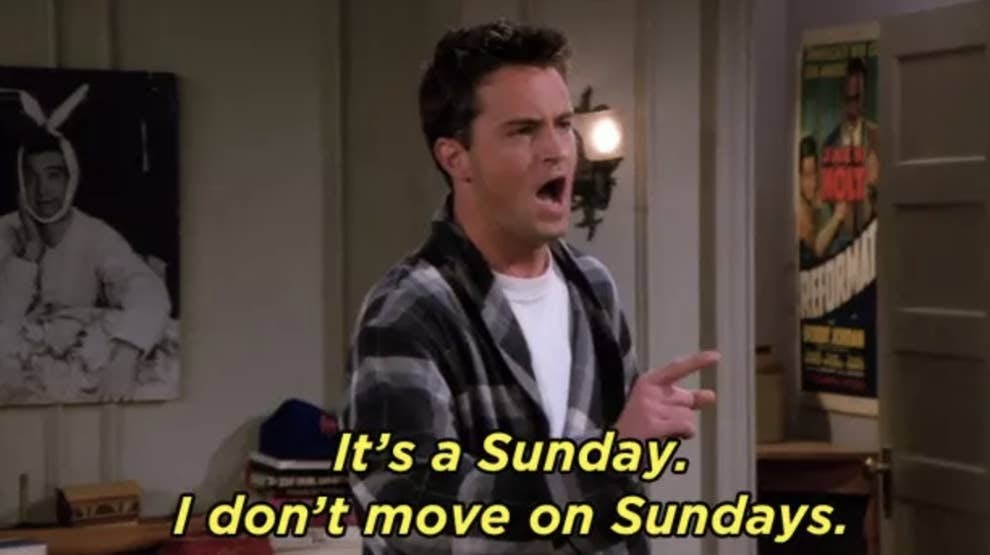 It is known from early on in the series that Chandler despises working out. Monica tries to get him to exercise on a Sunday once and he states that he doesn’t move on Sundays. There was also that time that Ross tried to help him quit his gym membership because he never used it. Instead, Ross ended up caving in and getting a membership himself. At the beginning of this episode, Monica discovers that Chandler owns a gym card. Chandler’s response to her discovery is “oh yeah, gym member. I try to go four times a week, but I’ve missed the last 1200 times.”

Let us now know which Chandler Bing quotes made you laugh the most in the comments below. 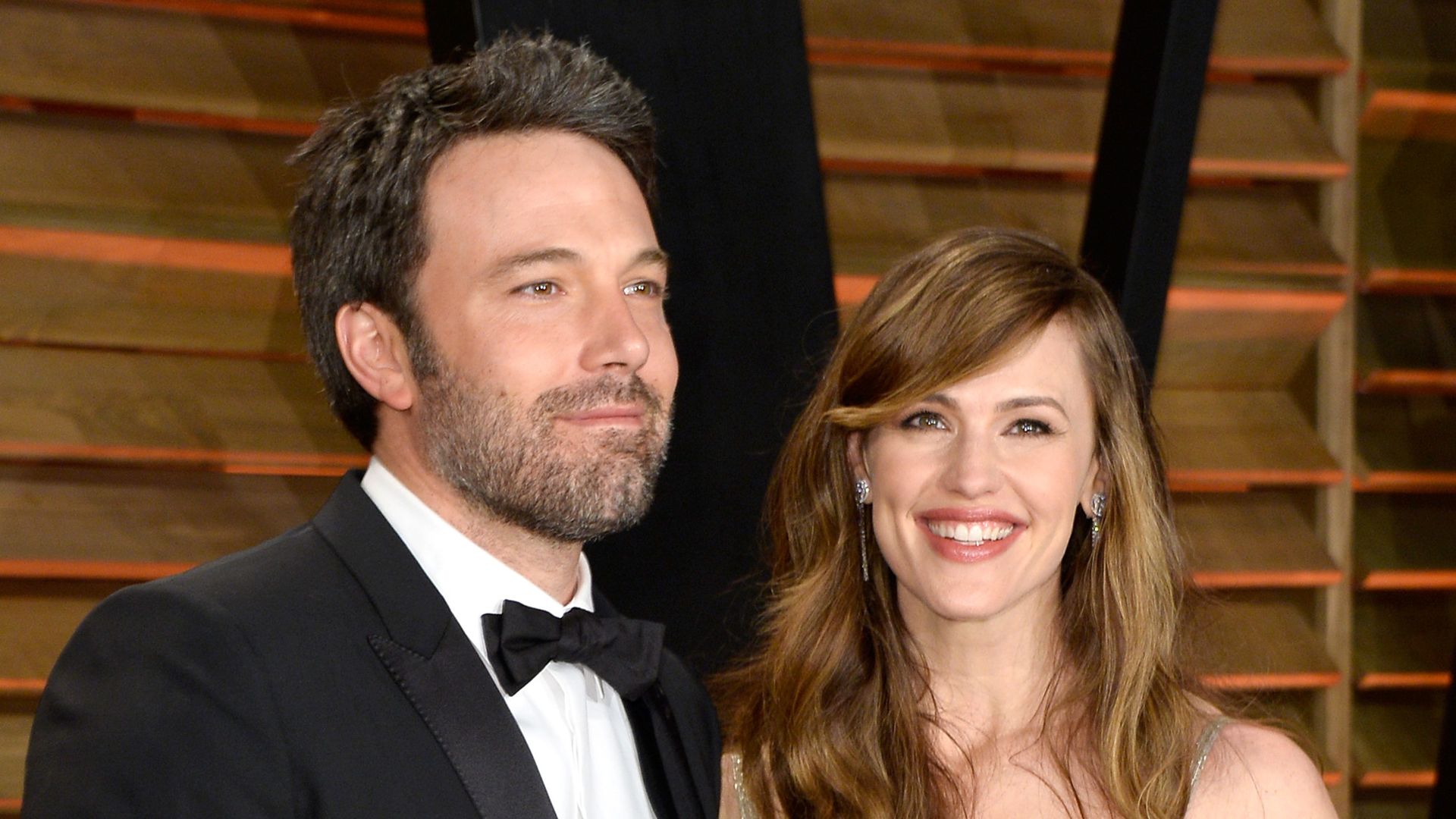 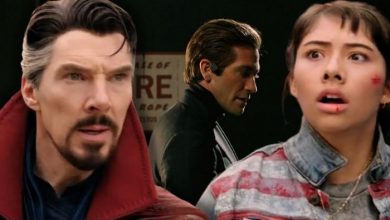 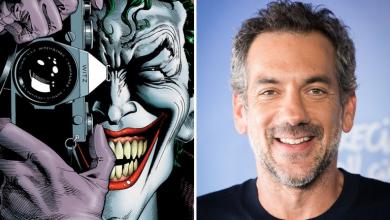