Thor Ragnarok is on a record-breaking spree and getting an amazing response from Marvel fans in particular and comic-book lovers in general. It is the funniest Marvel movie ever and best Thor movie for sure. The movie has opened to a massive opening weekend, raked in over $600 million already and is poised to enter billion dollar club. The first reactions from the audience are very positive and everything from visual effects to storytelling is just impeccable. The movie is sitting on 93% on Rotten Tomatoes at present.

Apart from the usual cast including Chris Hemsworth (Thor, God of Thunder), Tom Hiddleston (Loki), Anthony Hopkins (Odin) and Idris Elba (Heimdall), the movie also features two-time Oscar award winner Cate Blanchett as the powerful new villain Hela (leader of Doomeo i.e Asgardian Hell); Jeff Goldblum as the eccentric grandmaster who is an elder of the universe, he is sometimes called as “Inter-galactic Cosmic Pleasure-seeker”, he possessed the mind-gem until Thanos took it away from him; Tessa Thomson as the classic hero Valkyrie; Karl Urban as Skurge who is a powerful warrior and Mark Ruffalo as Bruce Banner/ Hulk. 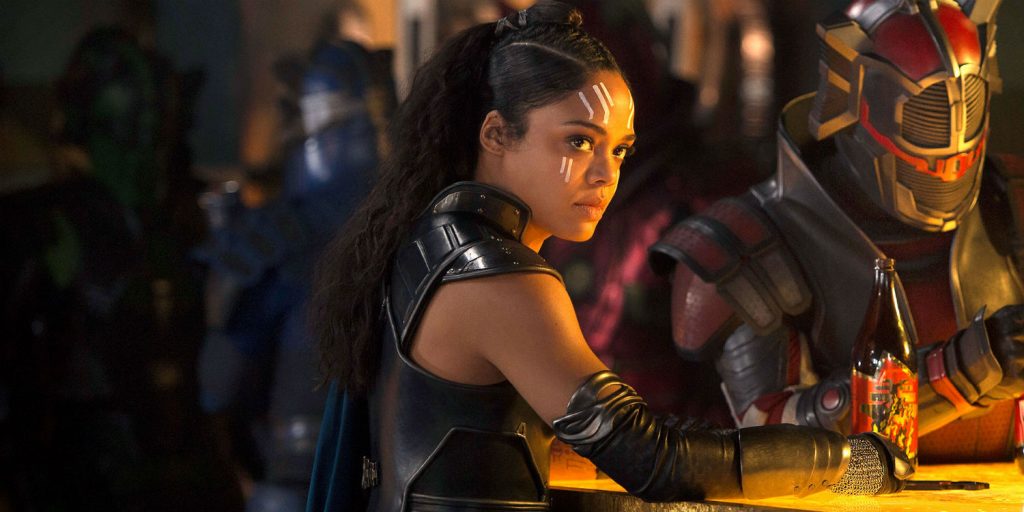 Tessa Thompson played the role of Valkyrie who is bi-sexual in the MCU, according to her. She tweeted: “She’s bi. And yes, she cares very little about what men think of her. What a joy to play!” It is not a big surprise as Valkyrie is bi-sexual in comics as well. Later, Tessa said “Val is Bi in the comics & I was faithful to that in her depiction. But her sexuality isn’t explicitly addressed in Thor: Ragnarok.” She claims that there was indeed a scene which would have addressed Valkyrie’s sexuality directly. Here’s what she said: 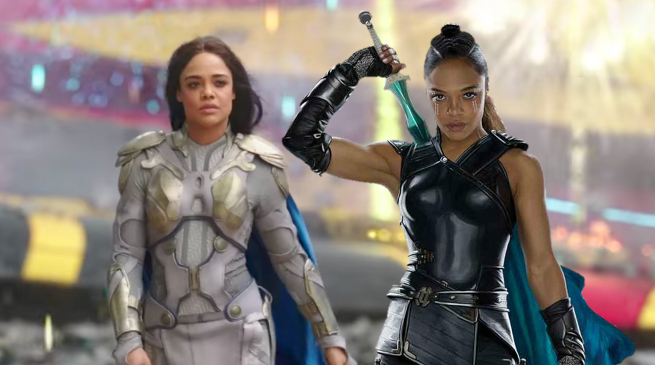 “Thompson even summoned the courage to pitch Waititi on making Valkyrie bisexual, based on her comic book relationship with anthropologist Annabelle Riggs. She convinced Waititi to shoot a glimpse of a woman walking out of Valkyrie’s bedroom. He kept it in the film as long as he could; eventually the bit had to be cut because it distracted from the scene’s vital exposition. Pay attention to her agony in a flashback where Blanchett’s Goddess of Death murders the rest of Valkyrie’s warrior clan.” 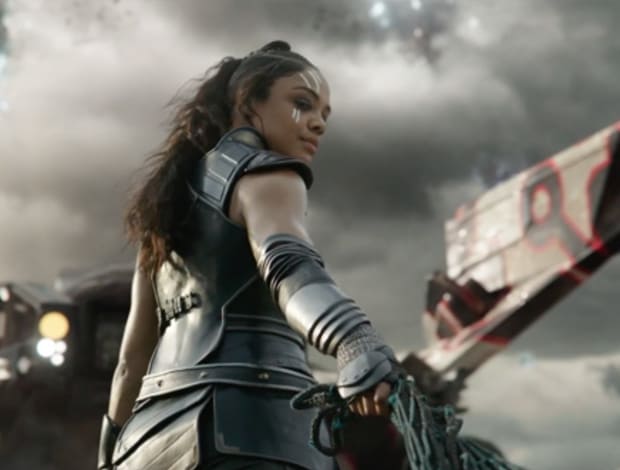 It’s unfortunate that Marvel studios developed cold feet on featuring an openly bi-sexual character onscreen. But they had no issues whatsoever in showing the extreme violence of Hela where she is slaughtering the entire female warrior clan, one amongst them is Valkyrie’s lover. Here’s what she said about that shot:

“There’s a great shot of me falling back from one of my sisters who’s just been slain. In my mind, that was my lover.”

This was not the only scene which was cut from the final version by Marvel. 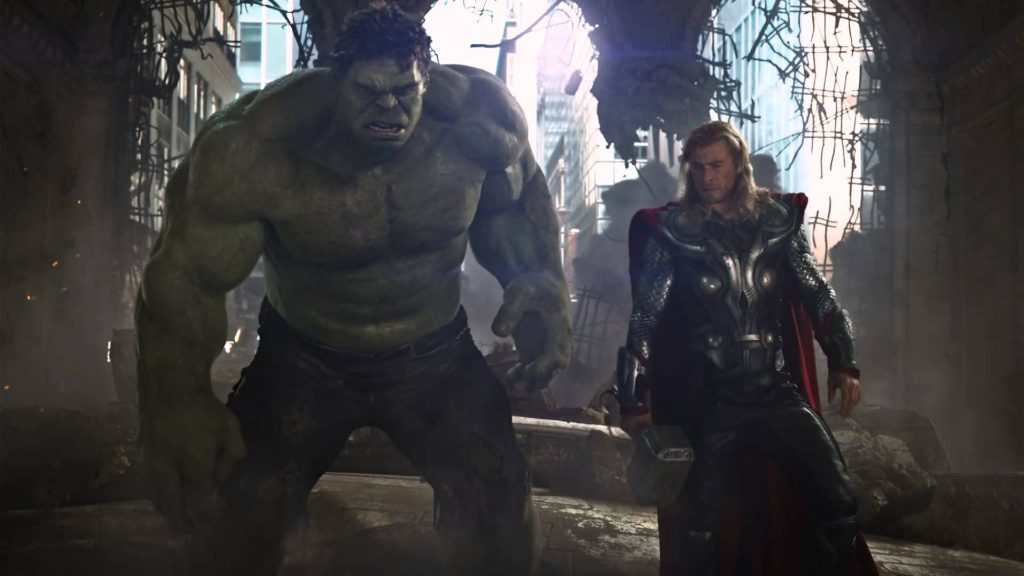 Thor: Ragnarok had many callbacks to other movies in the MCU but there was this one particular Hulk-centric callback from The Avengers which was edited from the final version. Recently, Empire spoke with the director Taika Waititi about the secrets of the latest movie. According to Waititi, a scene where the Hulk punches Loki just like he punched Thor in the first Avengers movie was cut from the final version of the movie. The scene where the team lines up on the bridge also didn’t make it to the movie despite being used during the marketing of the movie. This is what he really said: 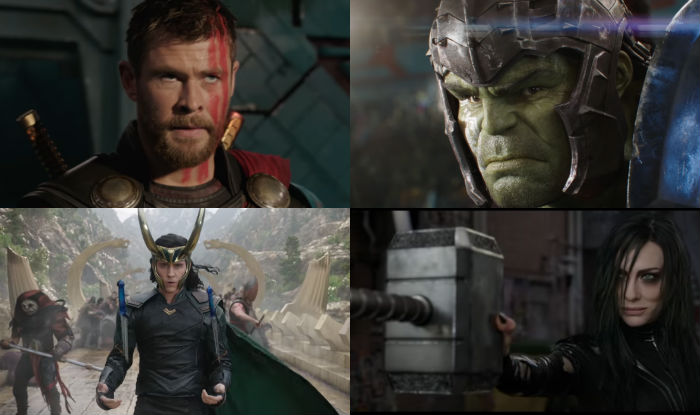 Apart from this, there was an alternate post-credit scene in the movie that couldn’t make it but may make it to the DVD and Blu-ray version of the movie. The director himself suggests that making it a part of the DVD version along with the Hulk-Loki callback scene is a real possibility. “It might be on the DVD,” Waititi said.

Lastly, there was also a cameo of Beta Ray in the early cuts of the movie but it wasn’t included in the movie. According to Marvel Studios President, Kevin Feige, Beta Ray wasn’t in the movie because the movie didn’t have enough of him. While speaking with Crave Online, Feige explained why it wasn’t the great time to introduce Beta Ray Bill in the movie. He said: 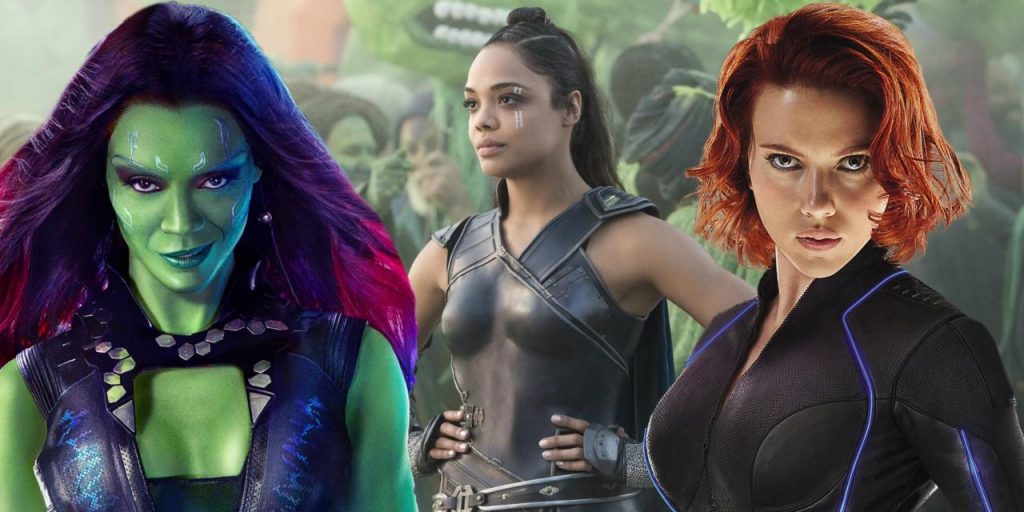 Post Ragnarok, Tessa Thompson is now pushing for an all-female MCU team-up movie and is also rumored to be part of two Avenger Infinity War movies. She will continue to play Valkyrie in Thor franchise and could also take up the mantle of “Female Thor” in the future Marvel movies. 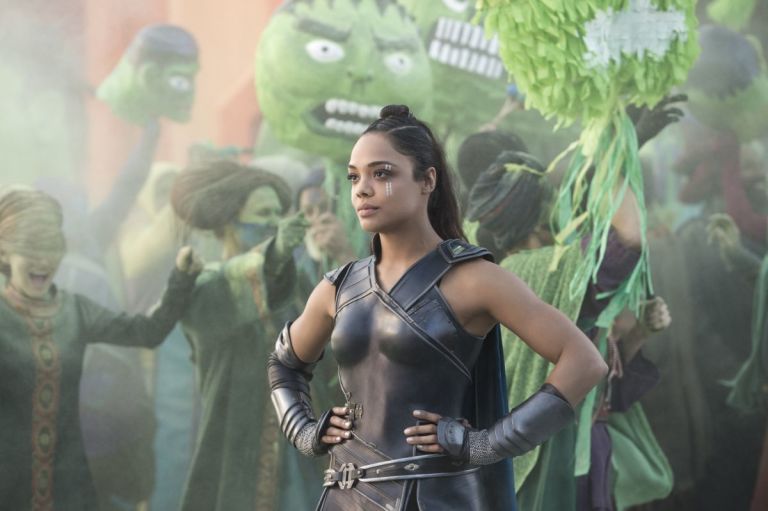 Recently, Chris Hemsworth had an interview with Screen Rant where he revealed that he was totally smitten by Tessa Thompson’s character Valkyrie in a very different way as compared to Jane. Here’s what he had to say:

The mighty Thor realized that he is no match to his sister Hela (Goddess of Death) when she broke his supposedly unbreakable hammer. He adapted to new circumstances when he came to Planet Sakaar. He fought Hulk in the arena and almost got defeated (although it was more like a tie). He met Valkyrie and brought her on board for saving the people of Asgard from Hela’s wrath.

It was finally “Revengers” vs Hela and still, she was more powerful. He discovered that the source of his power was not Mjolnir, it was just a conduit. Finally, he and Loki decided to release Surtur who fulfilled the prophecy of Ragnarok as he is Asgardian doom. In the end, Thor and co. managed to escape and they are now on a “cosmic road-trip” to Earth. The planet Asgard as we know it has been destroyed by Hela after Thor’s plans for saving it went horribly wrong. 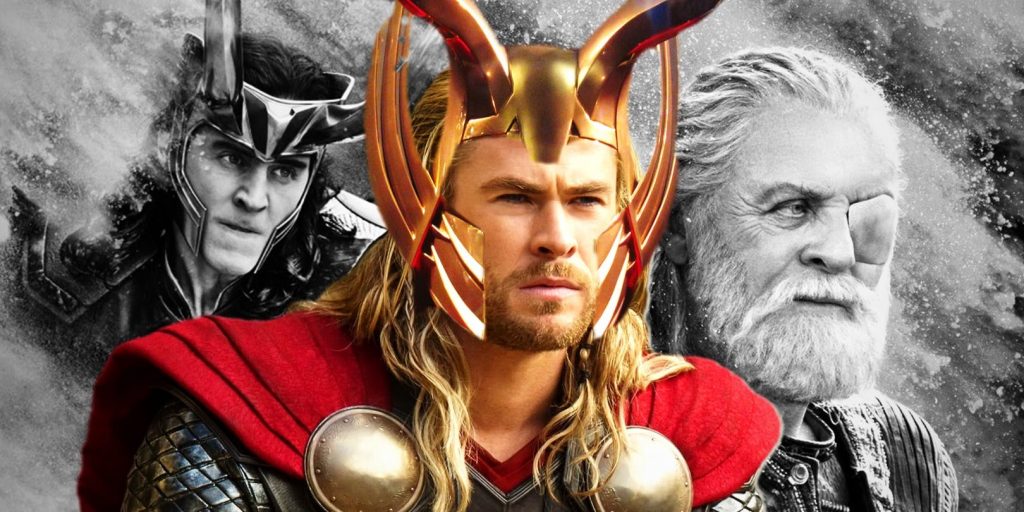 Thor is now King of Asgard, Hela is not really dead but incredibly wounded and people of Asgard are safe for now. There were two post-credit scenes in the movie but only the first one was consequential. Thor and Loki are discussing if they should visit Earth or not and suddenly they are interrupted by a massive ship. We could not see who was inside but Kevin Feige confirmed that it belongs to mad Titan himself. It is known as Sanctuary II.

It’s very likely that this scene will be the first scene of Avengers Infinity War. Why is Thanos interested in Thor’s ship? Well, at the end of Thor: Ragnarok, when Loki went into treasure room to bring Surtur alive, he looked at Tesseract and must have grabbed it because he is God of mischief. The ship will probably be destroyed by Thanos and Loki will gladly hand over the Infinity stone to him.

Don’t Miss: 12 Most Powerful Iron Man Armors You Need To Know About 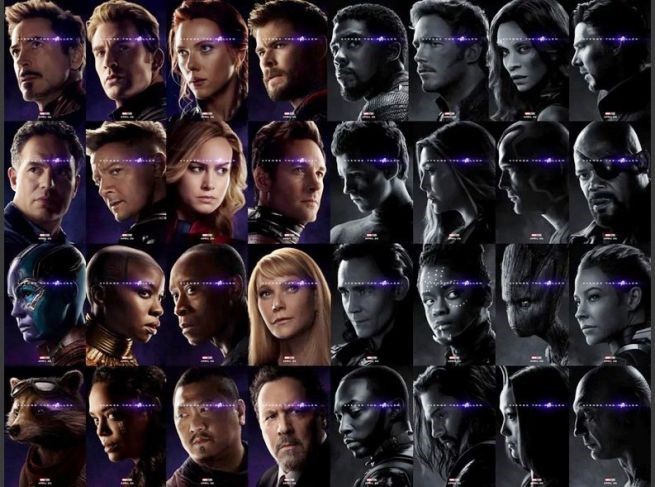 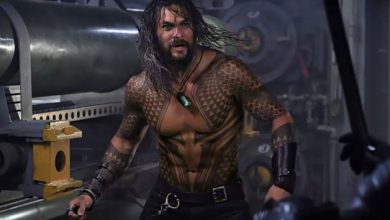 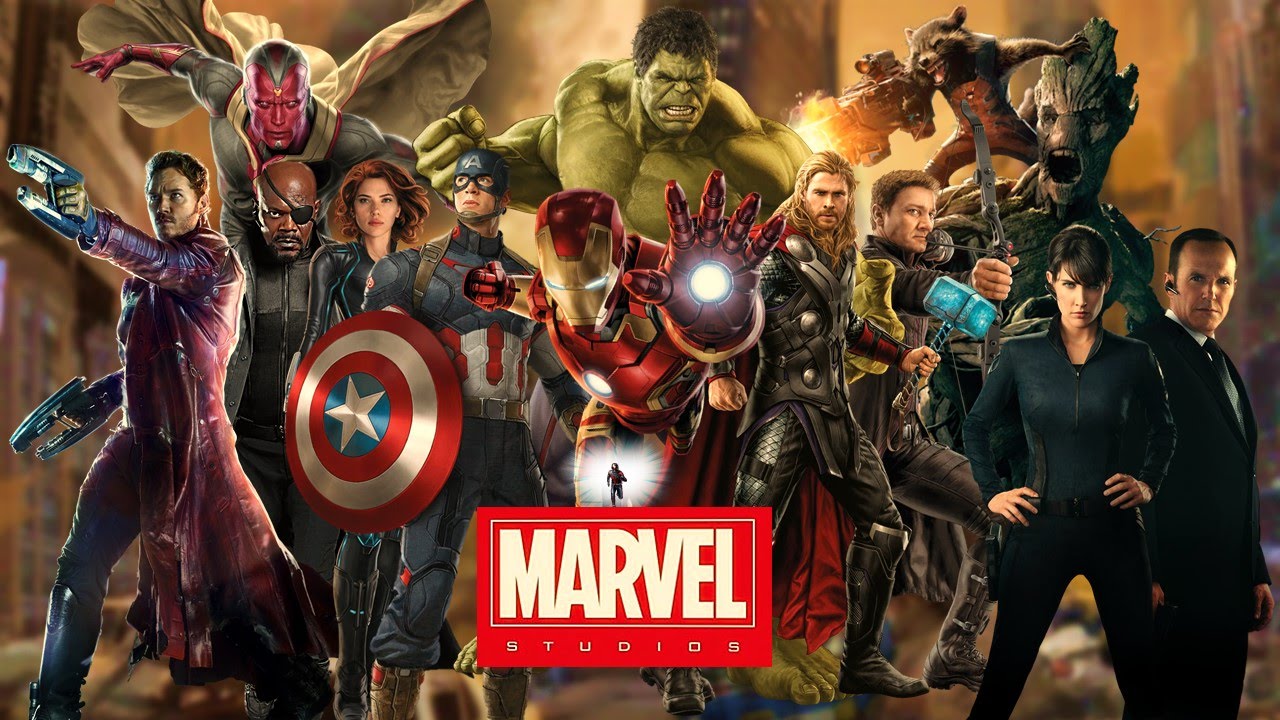