Brad Pitt’s wife Angelina Jolie faced a report on August 15 that she had committed suicide over her and Brad’s divorce rumours. Hall of Fame Magazine reported that Jolie’s suicide report was false and it turned out it was a hoax created by the internet trolls.

It appeared that a scam website reported this fake news with Jolie saying goodbye to her fans before committing suicide. The news headlined CNN Video Footage: Angelina Jolie Says Goodbye to Her Fans and to Brad Pitt Before Doing This Suicidal. The further report revealed that the website wanted to bring more views and traffic to the site.

According to Inquisitr, Brad Pitt and Angelina Jolie don’t seem to have any marital dispute in their lives. Rather they like to spend time with their children. Moreover, the 52-year old actor and 41-year-old actress appeared several times together last month. 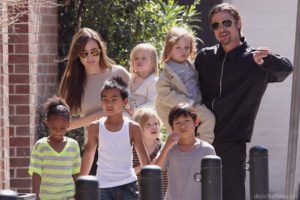 Well, the love bond began during the shooting of Mr. and Mrs. Smith. Before that, Pitt married to one of the Friends’ actors Jennifer Aniston, who appeared in the series as Rachel Greene. In 2005, Aniston filed a divorce and both of them decided to separate. Since then Pitt and Jolie decided to start a new life together.

Now check this out.

Last Month, In Touch Weekly, reported that Brad Pitt was in touch with ex-wife Jennifer Aniston, following her mother’s death.

“It was their first moment in months without the kids or staff around. Angie thought a good one-on-one conversation would enable them to finally catch up on their lives. Then, Brad casually mentioned that he’d reached out to Jen to send his sympathy after her mom passed away in May. He didn’t think it was a big deal.” a source told the magazine last month.

“To Angie, it was akin to Brad dropping a nuclear bomb,” the source revealed. “She was furious they’d reunited.”