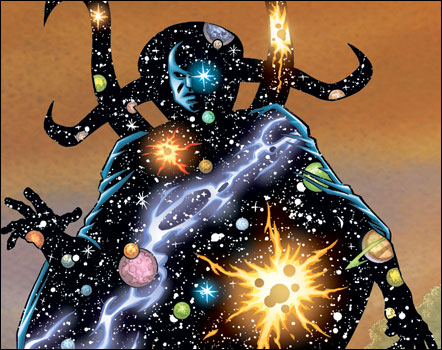 Created by Stan Lee and Steve Ditko in 1965, Eternity is the immortal embodiment of the universe. He is an omnipotent being who can manipulate time, space, matter, energy, magic and reality and can appear anywhere and can physically manifest as any force living within the Earth dimension. Now you can imagine how powerful he really is.

The Living Tribunal is the safe-keeper of the multi-verse. He told Adam Warlock that one hero cannot possess Infinity gems and forced him to split it among members of Infinity Watch. He is a giant humanoid with three faces acting as a Supreme court of the multi-verse.